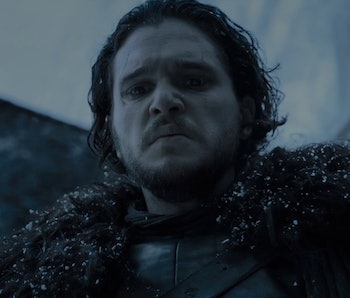 Jon Snow’s resurrection was the biggest moment in Game of Thrones Season 6, but Kit Harington thought the whole thing was just okay.

Sure, there were bigger moments in terms of scope and grandiosity (like the Battle of the Bastards or that Wildfire explosion sequence) and certainly more surprising ones (like the Hodor reveal in “The Door”). But when dead Jon Snow opened his eyes and drew that first panicked breath, it validated five years worth of speculation from book fans left hanging by A Dance With Dragons. For show fans, it validated a year of media frenzy and wild speculation that extended from the corners of Reddit to President Obama.

That being said, the entire endeavor ended up having an underwhelming impact on Jon’s character. And Kit Harington agrees.

In an interview with The Wrap, the first-time Emmy nominee said,

You don’t get the scripts until about two weeks before you start shooting the new season. I knew I was coming back to life, but I didn’t know if I’d come back as a changed person, as a villain. So I couldn’t pre-plan anything, which was hard. And then I got the scripts, and actually, he comes back as himself, as the Jon that everyone knows. Which at first I found disappointing.

Harington goes on to discuss the subtleties in Jon’s existential despair, which he has addressed in previous interviews, but this is the first time the actor has admitted to initial disappointment with the storyline. It remains to be seen whether this will be one of his trademark foot-in-mouth moments — like that time between Seasons 5 and 6 when he accidentally admitted that Jon was not dead — or if it’s just sound and fury.

But regardless, for any fans wishing Jon came back as more of a dick, take comfort in the fact that Harington is right there with you.

Game of Thrones Season 7 will premiere in summer of 2017.