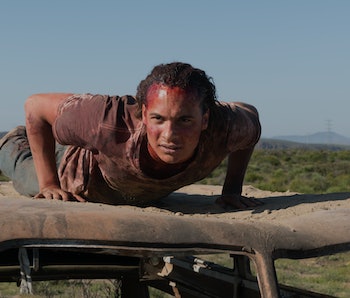 On August 21, AMC’s Fear the Walking Dead returns for the second half of its sophomore season, a vastly improved piece of television since its brief and sluggish freshman year.

Quite a lot happened when Season 2 hit the ground running, and here are all the major points you need to remember.

Victor Strand has nothing more to lose.

The major plot of Season 2 until its mid-season finale was reaching Baja, a fortified refuge where Strand’s lover, Thomas Abigail, waited. Unfortunately, the house’s staff harbored their families-turned-walkers down below, which became their undoing. Since Thomas was kind of on death’s doorstep anyway, the show wiped the fortress in Baja off the map, forcing some (not all) of its characters back on the journey for a safe space. Strand previously led the group, but now he’s just as lost as everyone else.

Nick is being a little shit right now.

While I found the storyline a little underdeveloped, Nick’s distrust of his mother Madison and kinship in Celia, the head of the Baja stronghold, was a giant thing when Season 2 went on break. With Celia dead, Nick blames Madison and has wandered off on his own.

He’s kind of being a prick. All it takes is five minutes for his ass to sit down and let Madison explain things, but that’s not great drama.

Travis and Chris are Lone Wolf and Cub-ing it.

Travis and his son Chris — who like Nick, resents his father for the merciful death of his mother — are now stuck together after being separated from everyone else. They have a lot of hashing out to do as father and son, and their journey through the apocalypse should be good for their souls. Expect a lot of crying.

Alycia should never be near a radio again.

The first mystery of Season 2 was Alycia’s mysterious “boyfriend” Jack, whom she befriended over the radio. Not long after that, he revealed himself to be part of a seafaring pirate gang, who aimed to take everything from everyone aboard the Abigail. They barely got away. It’s safe to assume Alycia won’t be the one making contact with anyone else from now on.

During Season 6 of The Walking Dead, commercial vignettes for Flight-462 aired that showed the beginning of the apocalypse aboard an airline. The plane crashed, and some survivors from the flight finally caught up with the main plot of Fear the Walking Dead. It was a short-lived and hostile union: Strand, that cold son of a bitch, cut off the survivors in tow, stranding them.

By total coincidence, they quickly teamed up with Jack and the other pirates and sought revenge, but it didn’t go well for them.

Daniel Salazar is a BAMF.

Though he lost his wife and still feels that pain, Daniel Salazar — portrayed excellently by Rubén Blades — is one badass on his way to hell. Season 2 showed brief reveals of a tough childhood in El Salvador (he may have been a child soldier; these flashbacks are maddeningly vague) that prepared him for the hardships of the apocalypse. Coming into his own in Season 2, expect Daniel to steal the show and become the real hero of Fear the Walking Dead.

But not for long, according to science.