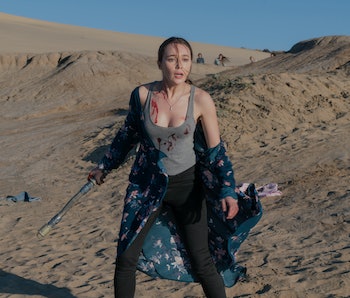 Remember mini-episodes during The Walking Dead this past season? At last, those finally matter. In “Ouroboros,” the third of Fear the Walking Dead Season 2, the last survivors of Flight 462 — Alex (Michelle Ang) and human toast Jake (Brenden Mayer) — meet the crew of the Abigail and beg for help, prompting the passengers to question whether they should help fellow survivors. “Are you people seriously debating this right now?” asks Alex. This is the apocalypse eroding humanity.

Stranded at sea after a clogged filtration system — if The Walking Dead hasn’t grossed you out yet, prepare for “Ouroboros” to make you sick with real shit — Daniel (Rubén Blades) chaperones the kids on a supply run when the Abigail finds luggage washed ashore. It’s the wreck from Flight 462, the first case of The Walking Dead “crossing over” with its own universe. While the kids goof off with dead people’s belongings, Travis (Cliff Curtis) and Madison (Kim Dickens) begin to doubt their increasingly hostile captain, Victor Strand (Colman Domingo) who changed course from San Diego to Baja without consent. A mutiny is brewing on Fear the Walking Dead, and it begins when Strand “strands” Alex and Jake out at sea.

The “ouroboros” is the ancient symbol of a dragon eating its tail, symbolizing life’s cyclical nature: ending as soon as it begins. Think a phoenix, only more gross. It’s one of the few universal symbols that’s appeared in Greece, India, Egypt, and even Norse mythology, and Carl Jung has related it to the human psyche.

Fear the Walking Dead isn’t that smart, but it tries its darndest. Broadly speaking, life has ended (as far as we know) for Alex and Jake, whose unseen “deaths” lets the Abigail survive. Jake, burnt from the crash, could turn at any time, so Travis comes up with humanely towing them. But bringing them along was a burden on the Abigail. So once again acting without his passengers’ consent, Strand cuts them loose. The Abigail will live, but at what cost?

For plot purposes, the kids’ plundering lets them learn more necessary zombie rules. Nick (Frank Dillane) finds out walkers die just as easily with a knife to the head as a gunshot, and covering oneself in guts is a solid disguise. It’s the same discovery Rick makes early in the primary Walking Dead, provoking broader questions about man’s survival. How did man invent fire? How did man rub zombie guts to make camouflage? You know, typical questions.

What’s in Baja? Surely, that’s the new driving mystery that will last likely up to the cliffhanger finale. Strand says he’s bringing them to a fortified house. Sure, buddy. Whoever Strand has been talking to could be an ally or the next big enemy on the scale of the Governor or Negan, the first Fear the Walking Dead would have. Or he/she could be their safe harbor. There’s no safe harbor, says all the marketing materials for Fear the Walking Dead, but the ocean isn’t any better.