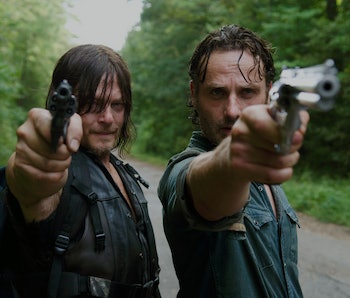 Let’s get this out of the way: The two AMC shows based on Robert Kirkman’s zombie comic books, The Walking Dead and Fear the Walking Dead, are not hosting a crossover episode. As executive producer Dave Erickson explained during a recent panel: “The chronology is so far apart, and there’s a continent between them.”

OK, fine, but the producers of Supergirl and The Flash said the same thing, and we all know how (amazing and wonderful) that crossover episode was.

So, bear with us, here: How could a crossover between cable TV’s two biggest zombie shows fathomably occur?

As Erickson pointed out, the timelines between the shows are out of sync. Fear the Walking Dead happens immediately after the apocalypse, while an uncertain amount of time has passed when The Walking Dead begins. A crossover episode would place The Walking Dead firmly in a timeline, which would be interesting.

Either the “crossover” happens during Fear TWD with characters from The Main Show being younger and lesser-experienced (and we all love prequels, yeah?), or it occurs during The Walking Dead and whoever shows up from Fear is guaranteed to survive their own show. That’s kind of a lousy spoiler, and Walking Dead is pretty shitty about spoilers.

The geographic location of both shows is another issue. The shows occur on both sides of the continent, with Fear the Walking Dead beginning in Los Angeles and Season 2 in the middle of the Pacific. Meanwhile, the characters of Walking Dead are currently Negan’s prisoners in the backwoods of Georgia.

So, quite literally, time and space separate The Walking Dead from its younger sibling, Fear the Walking Dead. Joy. But a crossover doesn’t have to be a full blown Special Episode, like Flash’s guest spot was in Supergirl. Take a page from the Marvel Cinematic Universe: sometimes all there needs to be is a simple prop or background reference that connects the worlds.

And it doesn’t need to happen either. TV and movie “universes” are most effective when the references are throwaway props or dialogue that enrich the experience without being essential to the plot (yet another thing Zack Snyder struggled to execute in Batman v Superman). Travis or Victor Strand passing by a yet-to-be-looted gun store and Daryl’s signature crossbow just lying around would be more than serviceable in getting nerds (like myself) to shut up about a crossover episode. It’s the little things!

Besides, wouldn’t a Fear and The Walking Dead crossover be kind of terrible? Like really, who would be the one to appear: Rick is still in a coma during Fear, Carl’s actor can’t pass off being a child anymore, and Daryl — Jesus, remember how weird Daryl was in Season 1?

I could maybe buy Shane or Michonne making an appearance, but not Rick or Daryl, the Franchise Faces of The Walking Dead.

So yeah, maybe it’s a good thing there’s no Walking Dead crossover in our future anytime soon. It would just emphasize how bad and bland most of the characters are on Fear the Walking Dead, anyway.