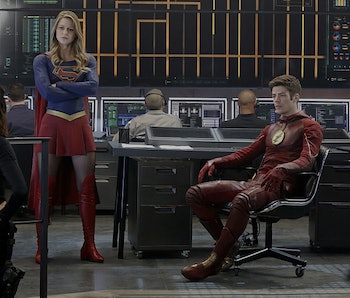 The multiverse is real, and it’s way more fun on TV. Tonight, DC Comics brought Barry Allen’s CW-verse Flash onto CBS’s fledgling Supergirl, crossing over galaxies and cable networks in one of the best superhero team-ups since Tony Stark and Bruce Banner became cool science bros in the Avengers.

But tonight wasn’t about science. No, tonight was all about ice cream — more on that later. Grant Gustin’s Barry Allen and Melissa Benoist’s Kara Danvers had channeled some serious crossover chemistry both in and out of costume, although the deliciously tongue-in-cheek Calista Flockhart (flawless as Kara’s boss Cat Grant) nearly stole the show. After the dark, dismal, corporate-sponsored rubble-fest of Batman v Superman, Supergirl and the Flash brought some much needed light, storytelling, and fun to the DC universe. Marvel’s various franchises have had the monopoly on hitting a comic-book mix of humor and thrills in recent years, while DC has skewed heavily toward the gritty graphic novel side of the spectrum — except on TV, where Barry Allen and Kara Danvers trade jokes as often as punches. It’s only fitting that the shows finally met, and the result was amazing. Here are the top five moments.

Early in the episode, as Barry Allen is making his introductions to Team Supergirl, he demonstrates his speed with a frozen treat delivery. An ice cream cone appears in Kara’s hand, to which she delivers a “YES” so enthusiastic it seems very likely that Melissa Benoist was not notified that she would be receiving ice cream before the director called “action!”

Grant Gustin fit in perfectly with the rest of Supergirl’s cast (although another white dude probably wasn’t what it needed), and his chemistry with Melissa Benoist put a lot of viewers firmly on board the Kara/ Barry ship — as Inverse’s Eric Francisco put it, “I’m sailing it to the new world of magic and wonder and away from Zack Snyder’s garish nightmare.” But the delightfully acerbic Cat Grant wasn’t letting them get away that easy, letting go of the best tongue-in-cheek, fourth-wall demolishing line of the show, after meeting Barry Allen for the first time.

“You look like the attractive yet nonthreatening racially diverse cast of a CW show. Who are you?”

Livewire, one of Supergirl’s main villains, is a super-powered baddie who is literally made of electricity. While Supergirl and the Flash are two of DC’s most over-powered heroes, it’s always fun to see show runners put their heroes against plausibly dangerous antagonists. Barry’s speedforce only made Livewire more powerful, making the Flash’s presence on the show feel like less of a Deus Ex Machina device to help Supergirl out of a tight spot. We also got a great super villain team up between Banshee and Livewire (“Like an evil Taylor Swift squad?”), which was a nice bit of character development and world-building that can sometimes get lost in monster-of-the-week superhero show formats.

“The Flash? Sounds like someone who’s only superpower is jumping out of an alley in a trench coat.” Cat got all the good lines this episode, but it was hilarious at how quickly she saw though Barry’s (admittedly flimsy) persona-non-maska. CBS may have set a bit of a silly precedent here, seeing as Cat still can’t tell that when Kara takes off her glasses and shakes her hair out she becomes Supergirl, but sure, we’ll go with it just for today.

5. Barry’s childlike glee at being on another Earth (again)

If you’re current on The Flash, you know that this isn’t Barry Allen’s first rodeo on another Earth. He previously traveled to Earth-2, a bizarro-world version of his own Earth, where he promptly took selfies with everything possible. It’s the same on Supergirl, where he crows over Kara’s alien spaceship, tries to take a picture, gets in trouble, and then has fun looking at all of the Department of Extra-normal Operations cool tech stuff.

Along the way, there’s a whole lot of engaging plot developments for Supergirl’s main story line — while the Flash’s presence on the show won’t effect his own story so much, Kara’s world is fundamentally changed by the episode’s last few minutes. But the best part about the episode (besides the ice cream), is DC bringing together two young, fresh, and still-optimistic heroes on screen (there’s even a Bernie Sanders joke). As a bonus, no skyscrapers/ city blocks/ entire floating cities (cough, Avengers 2) were seriously harmed in the making of this episode. We can only hope that Barry and Kara cross worlds again.