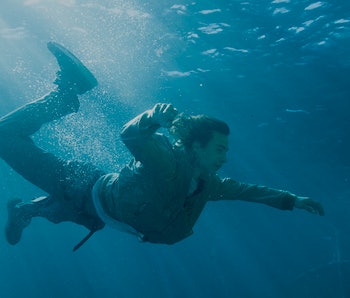 Quite a lot of viewers were mad, even outraged, at the finale of this season of The Walking Dead. Did someone die? Yes! Who died? You’ll find out in six months. In an age of instant gratification, audiences have developed an allergy to cliffhangers — and yet, the producers behind Fear the Walking Dead are promising another mid-season shocker for the show’s second season, which premiered last night on AMC.

After last night’s premiere, THR asked Fear the Walking Dead showrunner Dave Erickson if Season 2 will have a cliffhanger in its first half, and he answered plainly: “Yes.”

“I look at it as three chapters,” Erickson explains to THR. “We had the six-episode season one and we’re broken in two — seven episodes for the first half and eight for the back half — of season two. You want something monumental that will beg people to come back.”

Is that how cliffhangers work? Though angry Twitter users may just be blowing hot air, many have threatened to quit The Walking Dead after Negan’s first victim was left unknown.

Erickson continues: “The ideal cliffhanger, the ideal churn for any show — and this can be a novel or a TV show or a movie — but you want it to feel inevitable. You want that moment of shock and surprise but when you catch your breath, you want to feel that yes, there’s no other way that could have gone down. That’s always the goal. So yes, in that regard, when we get to the writers’ room and start building out a season, it’s always with an eye toward something that is going to close out that chapter and make the first seven episodes feel satisfying but also something that in so doing it also lays the seeds for what’s going to come in the back half.”

But what will the cliffhanger involve? Several arcs kicked off in the premiere episode “Monster”, all stemming from the central characters’ distrust of the new world. It’s not just the apocalypse Travis et al will have to deal with, it’s being out in the middle of the Pacific Ocean, living off of the mysterious Victor Strand’s luxury yacht, The Abigail, for however long until the inevitable comes. But what’s the inevitable?

Fear the Walking Dead producer and The Walking Dead co-creator Robert Kirkman told THR it “remains to be seen” if Alicia, the teen daughter of Madison — who kindled a friendship with a stranger named Jack over the radio — has anything to do with Season 2’s cliffhanger.

“Alicia is suffering to a greater degree than Madison, Nick or any of our other characters,” Erickson told THR. “When she hears that voice … that’s Alicia trying to hold on to the past and what the old world was. Then slowly but surely, Alicia gives up more than she planned on and it ends on a somewhat enigmatic moment…. We know someone is on the water and shot up that capsized boat and killed the dead that are now in the water. And there’s a suggestion that that could very well be connected to Jack.”

For my money, I’m willing to bet the mystery will also involve Victor Strand, who re-asserted himself as hostile in the season premiere. Though he befriended the group and helped them get out to the sea, they’re on his boat now. He’s the captain, as the internet meme goes. Everything can so easily go wrong, especially when a man with secrets calls the shots on the precarious high seas. And it’s not like the ocean really helps. Don’t they know? Zombies can swim.