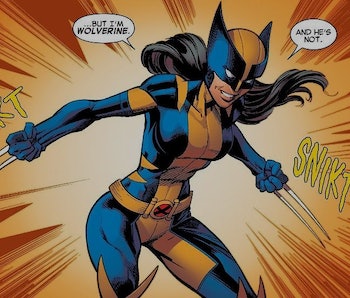 Hugh Jackman recently teased “Old Man Logan”, the title bestowed upon the aged, white-haired, elderly Wolverine. The upcoming solo film will be Hugh Jackman’s final appearance as the famous comic book character, so the future of beloved Wolverine is up-in-the-air. The solution to all of these Wolverine related issues could potentially be solved with the introduction of X-23.

Laura Kinney, aka X-23, was originally created by Craig Kyle for the X-Men: Evolution animated television show before making her debut in the X-Men comics in 2004. Designed as a clone of Wolverine, she sported two claws on each hand, plus a single claw on each foot. Throughout her comic tenure, she developed a mentor/mentee relationship with Wolverine before officially taking up the mantle of Wolverine this year in the All-New, All-Different relaunch of Marvel Comics post-Secret Wars.

X-23 has always been a fan-favorite character and her introduction into the X-Men cinematic universe would likely be welcomed. As Hugh Jackman is getting ready to hang up the claws, rumors are circulating about who could possibly replace the man who owned the role for 16 years. Perhaps replacing Wolverine with a new Wolverine isn’t the right answer. Why not use this chance to fill the X-Men cinematic universe with a new sharp-clawed berserker instead?

Instead of debating which, potentially Australian actor could be grizzled and growl-y enough to replace a character that’s become virtually synonymous with Hugh Jackman, casting the role of Wolverine’s genetically identical, opposite-gender clone would save a lot of headache. It helps that the post-credits scene for the most recent X-Men film, X-Men: Apocalypse, teased a possible introduction for X-23 into the X-Men films.

After the events of X-Men: Apocalypse — where the younger versions of everyone’s favorite mutants discover a secret lab that was holding Wolverine for scientific research — a secret group of agents storm the broken-down laboratory. The agents it turns out were working for the Essex Corporation, which fans recognized as the alter-ego for X-Men super villain Mister Sinister.

While a lot of scrutiny went into the reveal of the next potential X-Men big bad, it’s what the Essex Corporation took that opens the door to a possible X-23 appearance. The Essex agents took blood vials clearly labeled with Wolverine’s name. As a clone created from Wolverine’s DNA, the possibility of that DNA being used for the creation of X-23 is remarkably high. Instead of waiting for the new X-Men film for her reveal though, Fox should use the opportunity presented by Wolverine 3 to incorporate X-23’s debut.

This could help solve a lot of problems facing Hugh Jackman’s departure as Wolverine, as well as for potential narrative benefits for the third and final Wolverine film. While the previous two solo Wolverine movies haven’t been the strongest in the X-Men film canon, a lot is resting on the third movie to make up for the previous two, and X-23 could be the shot of adrenaline the Hugh Jackman film need to be great.

First, X-23’s arrival could give the filmmakers the courage to make Wolverine 3 a truly final affair. While Old Man Logan has been teased throughout the filming process, the Death of Wolverine story arc could be adapted for a true sendoff for the cinematic character, and much needed closure for the only X-Men who has appeared in every X-Men movie. While X-23 doesn’t feature too prominently in Wolverine’s death story, by having a character that is ready to take up the Wolverine mantle as soon as Jackman’s character makes a departure clears up any need for a complicated transition process from one Wolverine to another.

Secondly, as viewers have seen with the role of Spider-Man, replacing a famous comic book character with a new actor could end up becoming a tumultuous process. While the X-Men films have already dabbled with time travel to replace certain key mutant roles, replacing someone like Jackman for Logan’s Wolverine could be too big a task to wave off as a result of alternate dimensions, or temporal changes. It could be better to just start anew with a character that has every right to be known as Wolverine, only not actually having to be a Hugh Jackman facsimile.

The roles for Robert Downey Jr.’s Tony Stark, Chris Evans’ Steve Rogers, and Chris Hemsworth’s Thor from the Marvel Cinematic Universe are all under intense scrutiny since rumors of their respective actors departures have become more prevalent. Luckily Fox has an easy out with a character like Wolverine because of his legacy as the progenitor of many “Wolverine”-type characters that could easily replace him, without being him. X-23 just happens to be the most popular, and conveniently, most fascinating character to replace him.

More like this
Entertainment
7.2.2022 11:30 AM
You need to watch the most underrated superhero thriller on HBO Max before it leaves next week
By Richard Newby
Culture
6.29.2022 10:00 AM
6 years ago, Marvel released its most incoherent sequel ever
By Graeme McMillan
Entertainment
6.24.2022 11:15 AM
Behind the scenes at “Herogasm,” The Boys’ most NSFW episode ever
By Aaron Pruner and Jake Kleinman
Related Tags
Share: