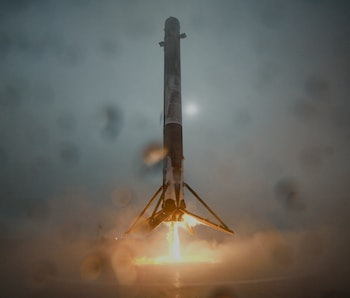 Fresh of its fifth successful rocket landing, SpaceX will once again launch a payload into space and bring its Falcon 9 booster back down to Earth, in the wee early morning hours of Sunday, August 14. The company will send up the JCSAT-16 communications satellite into geostationary space, and (hopefully) land the rocket back onto its Of Course I Still Love You droneship in the Atlantic Ocean.

SpaceX is aiming to liftoff at 1:26 a.m. Eastern Time, from Cape Canaveral, Florida. The launch has a two hour window, so any delays that push the operation past 3:36 a.m. will scrub the launch and force SpaceX to postpone it for a new date.

Last month, SpaceX pulled off its second-ever rocket landing on solid ground, after shipping off its Dragon capsule filled with 5,000 pounds of resupply cargo to the International Space Station. Unlike that launch, the JCSAT-16 mission will continue along with the company’s highly successful string of droneship landings.

Why a droneship this time? Communications satellites are almost always sent up to geostationary orbit — which is 22,236 miles above the earth’s surface. This is way higher than the low Earth orbit-flying ISS (249 miles up). It’s a lot tougher to steer a booster rocket back down to Earth this way, so using a droneship in the ocean provides some flexibility. SpaceX doesn’t have to target one specific landing pad — they just have to target a large area in which the droneship can move about.

It’s like the difference between trying to shoot a basketball into a hoop, and trying to hit a home run in baseball. In the former, no matter where you are, you are targeting a single static location. In the latter, you’re just aiming for a general area to achieve the same outcome.

It’s no exaggeration to say SpaceX is the hottest company on the commercial spaceflight scene right now. With five successful rocket landings, a goal to get to Mars in 2018, and two crewed missions for NASA on the horizon, Elon Musk and his colleagues are swinging into sixth gear to cement their status as the world’s premier spaceflight enterprise.

But first, there’s Sunday’s launch. Currently, there’s a 90 percent chance the weather will be good enough to blast off. You can watch the webcast here at SpaceX’s website.