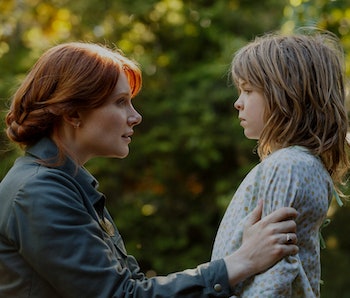 These days, the prominent adults that preside over this broken world are generally behaving like depraved children. Is it any wonder, then, that 2016 has seen the rise to feral-but-innocent children dominating movies and television? These poor souls are searching for their way in worlds that have gone haywire. Mostly, they function as evocative symbols of the human spirit in troubled times. It’s a theme we should not ignore as a trope of 2016 fiction: an occasion that should not go unheralded.

Here are the best children in this, the Year of the Feral Child.

A child deprived of a normal family, raised — if not by wolves, then at least by stentorian, sometimes-cruel scientists for whom her weaponized powers were more important than her well-being. When she unites with Mike, Lucas, and Dustin to find Will and enter the portal to the UpsideDown, she finds that there’s more to life. Actress Millie Bobby Brown gives one of the great and most nuanced child performances this year, and is one of its greatest on-screen heroes, period.

One of the most iconic feral children of children’s lit and cinema was reinterpreted once again (remember, the two other iconic Jungle Book films!) by director Jon Favreau this year. Never fear, younger generation; no matter how lost you feel now, you can find a way to survive in threatening terrain, and overcome your deepest fears, like the brave Mowgli opposing Shere Khan (in this case, the voice of Idris Elba).

The most powerful performance among these ranks is Jacob Tremblay in Room, a boy with flowing locks like a young girl’s, brought up entirely in a small shed without the ability to leave its four walls. Just how maladjusted he is to the rules of customary human behavior — and indeed any aspect of a normal life — is apparent when he leaves “Room” for the first time. The difficulties he and his mother (Brie Larson) have assimilating to the outside world, especially, makes Tremblay’s poignantly hyper-realistic performance the defining Feral Child rendering of the past calendar year.

Pete, a boy raised by a dragon in the woods for six years, is the Feral Child of the moment. The live-action-and-CGI Disney remake of one of their other classic properties — if lesser-known than The Jungle Book — hits theaters everywhere this Friday. Actor Oakes Fegley’s (Boardwalk Empire) performance has drawn praise, as has the film, for its charmingly realized fantastical realism.

Deus ex Machina 2.0, it might seem, with a dangerous artificial girl-weapon (The Witch’s Anya Taylor-Joy). The character of “Morgan” will provide a dark counterpoint to Eleven; as outright horror, Morgan’s agenda should prove a little darker than even Ex Machina, erring on the side of SCP Creepypasta more than Black Mirror. But again, Man built her ������������������������� self-absorbed, greedy, fickle Man. It ain’t really Morgan’s fault, is it? The Ridley Scott-produced movie comes out in September.

Doubtless, there are more I’m not considering: Would “The Boy” of The Boy could? Perhaps the self-made and wildly precocious Lyanna Mormont, the best character in the last season of Game of Thrones could be considered of this type?

And don’t forget the supernatural powers of the socially-maladjusted Alton Meyers in Midnight Special, or the children who are to orchestrate the alien invasions in Syfy’s Childhoods End and USA’s Colony.

Some new feral or pseudo-feral personality frightens us, and/or tugging on our heartstrings, every month, it feels like. We’re not complaining; it’s a powerful and fitting trope for a time when it feels like the lunatics are running the asylum, at the moment of Trump and Brexit. Of course feral children roam the Earth, and maybe their unique vision of the world, and ability to sustain themselves, is our only hope.