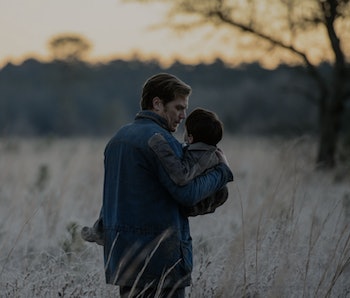 The opening scene of writer/director Jeff Nichols’ new movie Midnight Special says everything you need to know without explaining much at all. A man (Joel Edgerton) cautiously peers out of the door of a completely blacked-out hotel room while another man (Michael Shannon) kneels in front of a boy (Jaeden Lieberher) placidly seated on the floor reading comic books while wearing blue swimming goggles. In the background, a TV newscast explains an Amber alert has been issued for an 8 year-old boy named Alton Meyer who’s allegedly been kidnapped by two armed men. “It’s time,” the kneeling man whispers to the blue bespectacled boy, who we surmise is Alton. “We’re ready.” Before long the three are speeding down a darkened Texas highway in a black hotrod, leaving the audience asking, “Ready for what?”

Its this kind of hook that lures you into Midnight Special, a movie with tinges of 1980s Spielbergian sci-fi awe; the kind that creates its own insular mythology to convey the essentially character-based story at its core. It’s a step up for Nichols, who made the jump to this moderately budgeted $23 million studio film from previous low budget ethereal southern gothic dramas like Take Shelter and Mud. His newest’s story of a father trying to save his son who just happens to have mysterious powers is a prime example of a they-don’t-make-them-like-they-used-to mentality in the face of depersonalized blockbuster tentpole behemoths like the recent Batman v Superman: Dawn of Justice.

Instead of striving to over-explain everything for the sake of a franchise, Midnight Special reveals next to nothing as a way to be appropriately self-contained. By being purposefully vague, Nichols’ sci-fi speaks volumes.

With Midnight Special, Nichols seems poised to be the sort of former indie darling that could seemlessly transition into bigger blockbuster filmmaking. He could easily be the next Christopher Nolan, an auteur that took his heady small-scale cinematic language and created $100 million Batman movies with it. It’s something that Nichols himself doesn’t deny. In a Wired interview about Midnight Special, Nichols lamented, “Like, why can’t we have more Terminators, more Avatars? Let’s do that!” Later, he talked about his own approach: “I’ve never just said, ‘Let’s do some world-building.’ Maybe I’ll pull it off, maybe I won’t. But that’s what I want to do.”

This gets us into how Midnight Special builds its world in a way that’s antithetical to Batman v Superman-esque blockbusters. Filmmakers like Nichols (and Nolan and Terminator director James Cameron) are multi-functional. Their operative methods plant them firmly in small-minded stories that can exist in bigger cinematic spheres. It’s why Midnight Special can essentially be about the unconditional love between a father and son, but on the surface can use CGI to help it be about a cult’s potential messiah with magical powers on the run from the government.

The main concern of sci-fi superhero spectacles like Batman v Superman is to overly explain things for obsessive fans in order set up the next movies in the series or make up for past mistakes. Specifically it’s why, for some reason, characters in that movie sit and watch video files that introduce characters for the sequels or why our angry heroes go out of their way to basically look into the camera to say the areas of the city they’re leveling are uninhabited.

There are no looks towards camera or exposition dumps in Midnight Special, just a constant unfolding of its story to lets the audience make up its own mind. It allows scenes like Adam Driver’s inquisitive government stooge character to sit in front of a dry erase board plastered with random coordinates looking for clues about Alton and say, “I know where he’s going,” without spelling out why, or to leave a scene open-ended of the leader (Sam Shepard) of the boy’s cult question government officials by asking, “Ya’ll have no clue what you’re dealing with, do you?”

Even the film’s big final reveal of who exactly Alton is isn’t all that exact. You get the bare minimum of explanations, with vague insinuations of where he’s going and why. Questions are left unanswered, with the film almost challenging you to ask yourself why it’s even important to know the answers in the first place.

It’s a tendency that left some audiences shrugging the movie off as lazy and too reliant on its allegedly hollow sci-fi elements. But the movie has been intentionally indeterminate from the get-go. At the film’s SXSW premiere, Nichols explained the movie began as a simple idea of a chase movie with someone driving a fast car late at night. He later told the LA Times he set out to “write the leanest thing I possibly could,” and “I’m not here to make anyone happy.”

What’s needed from filmmakers on the cusp of breaking out like Nichols is this exact kind of storytelling. We need to do away with incessant fandom demands and have more movies that are relaxed enough to be vulnerable instead of safe and obvious in their setup. Only then will the blockbusters on movie screens be as fulfilling as something like Midnight Special.