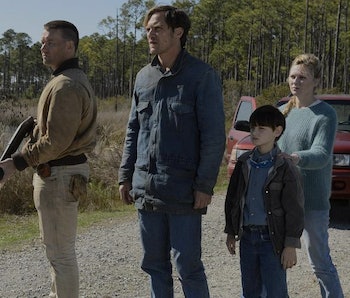 The best part about the film portion of SXSW is the sheer variety. Shorts and features, dramas and comedies, fictional films and documentaries – it’s all there, and it’s all sort of overwhelming. So it’s a serendipitous twist to the giant glorious clusterfuck of SXSW when the lineup reveals themes and ideas you’d never even thought possible. Case in point: the fest’s Saturday lineup of feature films, including Taika Waititi’s idiosyncratic Kiwi comedy Hunt for the Wilderpeople, Jeff Nichols’s serious sci-fi drama Midnight Special, and Mike Flanagan’s cleverly twisted horror film Hush.

They’re three movies without any superficial similarities. But each still manages to connect by subverting the genre they’re supposedly in. Comedy, drama, horror: they’re all the same. But different.

Hunt for the Wilderpeople

We’ve already noted why writer/director Waititi, who will next direct the third Thor movie for Marvel, is the most bizarre but perfect candidate for the superhero threequel gig. But if you need more proof, then go see Hunt for the Wilderpeople. But wait: What does a quirky comedy about a foster kid (Julian Dennison) who goes on the lam in the New Zealand bush with his grumpy foster father (Sam Neill) have to do with the Norse god of thunder? Not much, but Waititi’s filmmaking surely does.

There are so many genres at play in Hunt for the Wilderpeople. Waititi’s deft hand for character-based comedy is a gleeful example of how versatile he truly is. At moments, Wilderpeople is a sobering story of a kid left to rot in child services; other times it’s an off-kilter fish out of water story a la Waititi’s kiwi comrades from Flight of the Conchords. The absurdity of a chunky misfit and a crotchety old Hemingway-ish man wielding guns and surviving on instinct (or what Neil’s character Hec calls “the Knack”) is good enough. But what’s most most fascinating is that Waititi also has a perfect grasp on action-based cinematic language. Like Edgar Wright before him, Waititi’s send-up of action tropes and genre touchstones like Rambo works so well because he’s talented enough to be a legitimate action director. It’s most likely the reason his name will be on the credits for Thor: Ragnarok. Even if you don’t care about eventual Marvel movies, Hunt for the Wilderpeople is not to be missed.

Who knew Austin had its very own Spielberg? Writer/director Jeff Nichols is an Austinite just like Richard Linklater, so the SXSW premiere of Nichols’s Midnight Special was, well, pretty damn special. But instead of Linklater’s period-specific ruminations, Nichols has flexed his own southern, fried auteurist muscles with indie hits like Take Shelter and Mud. Midnight Special marks Nichols’s studio debut, and it elevates him to a whole new level.

It’s an in media res story of two men (Joel Edgerton and Michael Shannon, the DeNiro to Nichols’s Scorsese) who kidnap a child they think is some sort of magical being from a Texas cult. It sounds terrible when you try to explain it. It’s something you just have to see and experience: a subtle story that expertly withholds its dramatic information to keep you hooked. Midnight Special disproves the “they don’t make them like they used to” conceit, because it’s working from the same awe-inspiring, not-quite-sci-fi mode as early Spielberg (think of a heaping plate of Close Encounters with a side of E.T.). At worst, it resembles something M. Night Shyamalan might have made in his prime, but it ultimately takes you on a savage journey to make sense of the unexplainable — and almost gets there.

We may have gone a little hard on producer Jason Blum. Despite a few off-brand misses, the namesake of Blumhouse Productions knows how to put together a horror film. Sometimes they’re on the cheap and not very noteworthy, others, like director Mike Flanagan’s new movie Hush, should be talked about as much as possible.

The narrative sounds gimmicky at first: A deaf mute woman named Maddie (played by Kate Siegel) who lives alone in a cabin is stalked by a Michael Myers-esque killer — creepy mask and all — and it plays out in nearly real time. But what might have been an uninspired rehashing of old horror tropes is given new life by the film’s complete package. The pulsating score, the hovering camera work, the impeccably thorough sound design, and and the twin powerhouse-led performances by Siegel (who stays almost completely silent throughout) and John Gallagher Jr. as the unnamed killer prove there are still new unexplored areas of horror left.

The film was picked up by Netflix before it premiered at SXSW, which will definitely give it the exposure it deserves. Here’s hoping that subscribers will be brave enough to press play and sit through its lean, but nearly flawless 87-minute runtime, because Hush is one of the best horror films of the year so far.

More like this
Entertainment
Sep. 26, 2022
Christian Bale filmed “R-rated” deleted scenes for Thor: Love and Thunder
By Jake Kleinman
Culture
Sep. 18, 2022
You need to watch the sexiest sci-fi thriller of all time on Amazon Prime ASAP
By Andy Crump
Entertainment
Sep. 21, 2022
You need to watch DC’s most underrated movie of all time on Netflix ASAP
By Eric Francisco
Share: