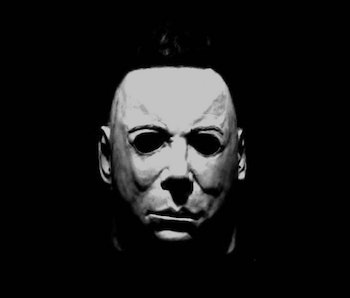 Think of the raw stones it took for John Carpenter to call his 1978 Halloween scare flick Halloween. It’s as if the director was daring his audience to consider it a classic, and guess what? Halloween and its copious sequels have slashed across the silver screen for nearly 40 years now, with their one constant, almost, remaining Michael Myers. The killer in the mechanic’s jumpsuit who, behind a William Shatner mask, stalks suburban teenagers with any number of gigantic knives set to that memorable music has brutalized his way to icon status. It wouldn’t be a Halloween without an element of Halloween.

A lot of the movies are terrible, a few are outright classics, and some are misunderstood gems. We’ll start with the worst cuts and work our way up.

10. Halloween: The Curse of Michael Myers

The sixth installment of the Halloween franchise is the worst. Plain and simple. It scarcely resembles what made the characters and franchise so memorable in the first place. Halloween 6 does the near impossible by over-explaining itself while making zero sense. With a laborious plot twist that sees the faceless killer Michael Myers as the product of a group of druids using selective breeding to weed out the most evil humans on the planet using what they call the “Curse of Thorn,” Tommy Doyle, a character from the original movie played here by a pre-fame Paul Rudd, tries to uncover the plot using the grandson of Laurie Strode (the character played by Jamie Lee Curtis in the original).

Confused? A lot of people were. A dreadful test screening forced filmmakers to replace the original ending and reshuffle 20 minutes of the movie that renders the plot into a baffling mess. The movie was even renamed after it was finished, as seen in the trailer above. Many of its plot points would be retconned in subsequent chapters as many of the other filmmakers that jumped on the Michael Myers bandwagon would freely do. Mostly, Halloween 6 is a forgotten mess but remembered for its so-bad-it’s-good performance from a Clueless-era Rudd.

By 2007 the franchise had become more of a joke, with horror fans openly pining for the slow-moving homicidal madman of yore. This forced producer Malek Akkad (who took the series over from his father, Moustapha, who took it over from original director John Carpenter) to go back to the drawing board. What he came up with was to have former metal frontman-turned-movie-director Rob Zombie remake one of the most influential horror movies of all time. It was a bold move that didn’t pay off.

Though it features solid performances from Malcolm McDowell and Scout Taylor-Compton doing the impossible by stepping into the role of Laurie originated by original scream queen Jamie Lee Curtis, Zombie’s remake is a hopeless rehash. It’s a near exact copy of the original, lifting story beats, music, and dialogue wholesale from the 1978 original while adding nothing more than an overwrought and overlong intro that lays out the home life of Michael Myers as if, for some reason, to make the personification of evil more sympathetic.

8. Halloween 5: The Revenge of Michael Myers

The most boilerplate entry in the franchise, Halloween 5 continues the story of Jamie Lloyd, the daughter of Laurie Strode who was introduced in the fourth installment because Jamie Lee Curtis didn’t want to associate herself with redundant horror movie garbage. 5 begins setting up the Curse of Thorn plotline that barely resolves itself in 6, and never really bothers to make the audience care about who Michael Myers is murdering and why. At one point, the focus shifts from Jamie and her stepsister Rachel to her friend Tina, whom Jamie now treats as if she were her sister. We’ve never seen Tina before, we don’t know why Jamie likes Tina so much, and if we were to think about it for more than a second we’d realize we don’t care. Halloween 5 is a bridge between the three movie arc set up in 4 and ultimately bungled in 6, and is so inconsequential it’s difficult for fans of the series to even remember what happens. It’s also ludicrous enough to have us believe that the 60-year-old Loomis, played by the increasingly desperate Donald Pleasence, can simply take down Michael Myers with a 2x4 at the movie’s climax. It’s a boring ending to a boring movie.

People may be too quick to call Resurrection the worst of the franchise. It certainly seems like the worst, mostly because it sidelined the franchise for five years before the 2007 remake. But it also is responsible for lazily killing off the franchise’s key heroine, Laurie Strode, in a brief and unfair pre-credits introduction. That part sucks, and a lot of what happens after that does too. A startup called “Dangertainment,” led by, and we’re not kidding, characters played by Busta Rhymes and Tyra Banks, recruit college kids to explore the Michael Myers house overnight and live-stream it. Lo and behold, Michael Myers shows up again and begins picking off the unsuspecting fame-seekers (one of which is played by eventual Battlestar Galactica star Katee Sackhoff) one by one. It is the epitome of a plot gimmick, and one that has no real place in a Halloween movie. And yet it has a prophetic storyline about social media and living our deepest fears on the web. Plus, theres something so satisfying about Busta Rhymes telling Michael Myers, “Trick or treat, motherfucker,” before roundhouse-kicking him in the face.

6. Halloween 4: The Return of Michael Myers

After the failed experiment that was Halloween III, the only entry in the series without Michael Myers (more on that later), John Carpenter and producer Debra Hill ceded their stake in the series to producer Moustapha Akkad, who proceeded to bring the Myers character back into the fold. Jamie Lee Curtis opted out as well, and her character’s daughter Jamie (played by actress Danielle Harris) was introduced, while Laurie was said to have died in a car accident off-screen. Most of what was set up in 4 would be glossed over or outright ignored in subsequent installments, but there is some charm to the way the fourth installment calls back to the original. It isn’t as blatant as Zombie’s remake and instead plays up the false suburban idyll that made the original so unsettling. It’s still a lesser version of the story in almost every way, but the strong performances by Harris and Pleasence make it an almost worthy series realignment.

After hearing the critics call his remake a lazy retread of the original except with more gore, Zombie zagged. The intro hospital set pays homage to the 1981 Halloween II before it goes for a realistic take on how Laurie would deal with the after effects of her trauma from the first movie. It’s a bit heavy-handed, but Taylor-Compton’s great second go around as Laurie shows us a damaged person falling deeper and deeper into madness, just like her murderer brother. Zombie also employs a goofy motif of having Michael, now stalking back to Haddonfield yet again, continually see the ghostly apparition of his mother (played by Zombie’s own wife, Sheri Moon Zombie) and his younger self. It again humanizes Myers, who we see is psychologically fragmented and sympathetic, before he repeatedly murders innocent bystanders in a gruesome fashion. The confusing grey area Zombie puts Myers in doesn’t really illuminate the character, and yet Laurie’s story grounds the movie in a tragic horror missing from the other installments of the series.

Halloween H20 isn’t afraid of being of its time. Its post-Scream nods to self-referential horror isn’t a fluke; H20 was produced by Scream writer Kevin Williamson whose wordy stories of meta satire dominated the late ‘90s scene on the big and small screen. Like Scream, H20 presents up-and-coming beautiful people like a young Michelle Williams and a fresh Josh Hartnett. But the real significance of the movie is Jamie Lee Curtis, who returns as Laurie, living as a principal of a northern California town under a fake name with her son (the Jamie Lloyd plot is done away with altogether) because she’s still on the run from her brother. The continuation of the story isn’t as intentionally grounded as Zombie’s Halloween II, but Curtis’ performance channels the terror of the original. It also marked a rousing cap to the Laurie/Michael story, as Laurie finally kills Michael at the end by decapitating him. Too bad Resurrection hastily explained away this conclusion to bring the masked murderer back again.

Halloween II was bigger and more heavily advertised following the success of the first movie. But it’s still a fairly self-contained piece. Immediately after the events of the first movie, Michael tracks Laurie back to Haddonfield Memorial Hospital to terrorize its employees before finally zeroing in on her and Loomis. Plot holes abound — why didn’t Michael just get it over with by killing Laurie first? — and it’s an egregious example of the “idiot plot”, but it still pans out into a more complicated web of horror. This is, after all, the installment that introduced Laurie as Michael’s younger sister. Director Rick Rosenthal, who would return years later to helm Resurrection, wanted a more cerebral movie than the original. He delivered that, but the studio didn’t like it, so they had John Carpenter direct reshoots to add more gore to the moody and dramatic sequel. Its slightly elevated scale, the extent of its gruesome kills, and its plot twists all make it one of the great, if not misunderstood, horror sequels.

2. Halloween III: Season of the Witch

Speaking of misunderstood: Remember Halloween III: Season of the Witch? After the success of Halloween and ostensibly killing off Michael Myers in Halloween II, John Carpenter wanted to make the “Halloween moniker into an anthology series, introducing a new movie with a new plot and new characters every year. What they came up with on their first (and last) version of this plan was the more sci-fi-leaning Season of the Witch. In this new story, an alcoholic doctor uncovers a plot by an evil toymaker (and witch) who sells Halloween masks to kids across the country in order to kill them on Halloween night using a TV broadcast that will melt their brains. Beneath the schlocky plot beats is a satire of the shameless commercialization of holidays (especially Halloween) and a send-up of the robotic corporate culture. Its hopelessly cheesy at times, but it still swung big. Then, it flopped at the box office. Pretty soon Michael Myers was back, but the movie continued to resonate with fans who appreciated the new direction the filmmakers took with the series’s only standalone entry.

As if there was any other choice but the original. John Carpenter’s Halloween basically invented the slasher genre and spawned the thousands of copycat movies that attempted to cash in on its disruption of suburban values, teenager culture, virginity, familial strife, and concepts of good and evil. It also brought independent cinema to the masses, turning its DIY aesthetic into the highest grossing independent film of all time until it was unseated by Teenage Mutant Ninja Turtles in 1990. It launched the careers of everybody involved, most notably Curtis and Carpenter, who went on to have ups and downs in Hollywood till this day. But it all started with Michael Myers.