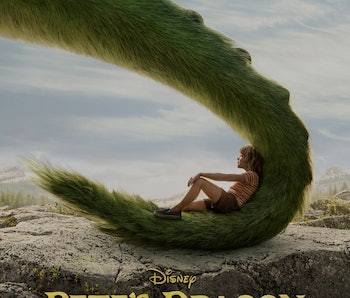 As Ghostbusters has taught us, people tend to get a tad upset when studios remake or reboot movies they loved as kids. The 1977 version of Pete’s Dragon isn’t a beloved classic the same way that other Disney hits are, so it seemed like the perfect movie to revisit in a big-budget remake. We had a peek at a teaser trailer for director David Lowery’s movie in February, but a full trailer just dropped in all its glory.

Lowery was previously known for directing the low-budget indie drama Ain’t Them Bodies Saints, which was a semi-abstract Terrence Malick-type movie about escaped convicts. It made him a questionable choice to helm a CGI-laden Disney movie update, but if the trailer is any consolation, it looks like he’s made the transition from small-time to big-time rather nicely.

Set sometime in the 1970s or 1980s in the Pacific Northwest, we first said Lowery’s movie reminded us of Spike Jonze’s philosophical kid’s movie Where the Wild Things Are. We still stand by that, but the full trailer is full of the magic and wonder that typified the best Spielberg movies of the ‘80s. There’s definite E.T. vibes going on in this trailer. It’s good material for Lowery to emulate for something like this, and it seems like he’s pulled it off.

Take a look at the trailer below:

By mixing grown-up drama with childlike adventure, Lowery tapped into something that seems to have been forgotten by lots of flashy summer blockbusters. It’s obviously the kind of movie that cherishes the simple moment of how thrilling it would be as a kid to ride on a dragon – instead of gigantic explosions.

Pete’s Dragon is definitely one to follow. It flies into theaters on August 12.