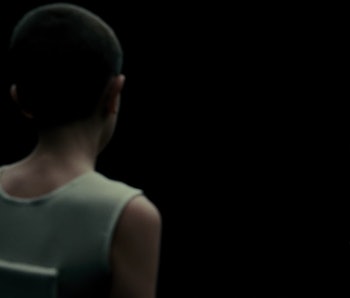 Sure, fans are clamoring for Netflix to announce a second season of its newest hit, the Spielbergian supernatural thriller Stranger Things, but the first season is still fresh in our minds and very worthy of continued discussion.

There are a ton of fascinating details in the show. We’ve already talked about Winona Ryder’s frantic but assured comeback performance, the way in which series creators Matt and Ross Duffer tease out the show’s main monster, how they show the lead characters using Dungeons & Dragons, and the overflowing 1980s genre references packed into each episode, but it doesn’t stop there.

One of the most memorable details of the sci-fi, government experiment-based madness happens to be the most simple. When telekinetic savior Eleven (Millie Bobby Brown) lays in a sensory deprivation tank and uses her mental powers to project herself into the Void, a blackened spatiotemporal vacuum that connects the real world and the show’s alternate dimension, the Upside Down, it could have been some big overblown CGI trick. Instead, the Duffers made sure to keep things simple.

“What we were trying to do was come up with a visual representation for being in Eleven’s head,” series creator and director Ross Duffer told Inverse. “We wanted to get that across in a very simple way that obviously wasn’t going to involve heavy VFX.”

For the two brothers, it was an opportunity to use the budget restrictions of the freshman show to their advantage, while also paying tribute to a contemporary film they love. “I think it’s one of those things where the limitations of being on a TV schedule and budget made it us be more creative,” Ross Duffer said. “People online have made comparisons to Under the Skin, which was an obvious reference to us. It’s a beautiful movie.” He explained, referring to similar scenes in British filmmaker Jonathan Glazer’s 2013 experimental sci-fi film where Scarlett Johansson’s alien character lures her unsuspecting victims.

“Really what it is, is just an inch of water on the ground and then we just hung up black curtains to surround everything,” Matt Duffer said. “Then suddenly we’re in Eleven’s head. It’s cool how you can achieve something you’d think would be such a big idea in such a simple way.”

While the resemblance is obvious — a female character using an entirely blacked- out area to explore somewhere that seems to be void of time and space — the Duffer brothers told Inverse they used such a compact and practical approach because they didn’t want their whole sci-fi based story to get too overwrought with detail. That goes for the major scenes in the Void to the opening sequence that introduces each of the show’s episodes, or “chapters.”

“The Void was a great way to portray an abstract and sort of bizarre idea, but what we were trying to do with the show was go back to the idea that simple can be better,” Ross explained. “Even in our title sequence — as opposed to trying to one-up these huge shows or big movies with elaborate sequences, it was always about going back to the simplicity of something you couldn’t do before you had big CG effects.”

It’s obvious that the Duffers were inspired by the movies and TV shows that they loved growing up, but they managed to transition that love of feature films into a more contemporary way of watching TV shows like Stranger Things.

“We’re movie guys, so we always approached Stranger Things as one big eight-hour film,” Ross Duffer told Inverse. “We started getting excited by filmmakers that were moving into television and telling very cinematic stories like David Fincher or Steven Soderbergh or Cary Fukunaga. That got us talking about how television was the place where more original stories were allowed to be told, and that made us think about what if we went back to the kind of movies that we grew up loving.”

The Duffers always wanted the Netflix model as their ideal for Stranger Things, and were overjoyed when their deal was made for the streaming platform because its plan aligned with how they always wanted to tell the Stranger Things story. It’s a throwback series with a contemporary rollout.

“We’ve heard discussions about what this would have been like as a feature film or if it would have been better rolled out one week at a time,” Matt Duffer said. “But the idea of a one-week delay between shows was the main reason why I didn’t get into television growing up. We didn’t get into TV until we could start binging shows, and initially we binged the old school way with DVDs of The Wire or The Sopranos through the mail with Netflix. I get the water cooler effect the week-delay has, but to me it’s not nearly as effective.”

The sibling filmmakers hope that they can use this same mentality should Netflix decided to give Stranger Things a second season. There’s definitely room for it, as the pair have left narrative breadcrumbs that could lead to a rich plot in a streaming sequel. But as for the bigger picture, Matt Duffer thinks they’re headed in the right direction. “Maybe it’s just my brain but it really helps me get emotionally involved in a story if I can consume it more rapidly,” he said. “I feel like the old-school way to approach television… that will eventually go away completely.”