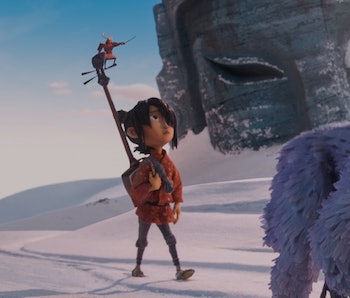 The new music video for Regina Spektor’s cover of “While My Guitar Gently Weeps” for the upcoming Kubo and the Two Strings is an absolute treat. From the moment it was released, Spektor’s take on George Harrison’s classic song was a hit, but the video gives us a new look at the film set to Spektor’s cover.

In the video, we see Kubo, Monkey and Beetle on their quest to unravel the mystery of Kubo’s family and his destiny. Along the way, we meet formidable foes like the Giant Skeleton, the Moon Beast, and the sisters. Kubo takes place in a fantastical version of Japan that was heavily influenced by Japanese art and tradition. The music video’s footage’s footage’s footage (much of which comes from earlier trailers) highlights that aesthetic influence.

The song itself also reflects Spektor’s reimagining of “While My Guitar Gently Weeps” includes a shamisen — a traditional Japanese instrument. In the film, a big part of Kubo’s character is his magical shamisen, which he uses to bring paper figures to life as he tells stories.

Kubo and the Two Strings arrives in theaters August 19, and the soundtrack (including “While My Guitar Gently Weeps” and original score from Dario Marianelli) is available now.

More like this
Mind and Body
6.29.2022 6:30 PM
How music makes you feel may depend less on your brain than scientists once thought — study
By Allison Parshall
Entertainment
6.25.2022 12:30 PM
'Rings of Power' video sets up the return of Tolkien's most underrated creatures
By Alex Welch
Entertainment
6.29.2022 9:48 PM
Fantastic Four leak allegedly reveals the shocking actor playing Doctor Doom
By Dais Johnston
Share: