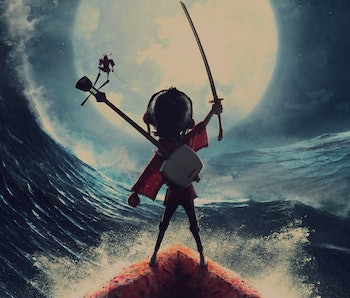 Oregon-based animation studio LAIKA, the makers of Coraline and The Boxtrolls, has unveiled its next stop-motion and 3D animated movie, Kubo and the Two Strings.

The Japanese-inspired fantasy finds young whippersnapper Kubo embarking on a quest to find the armor of his father — the most powerful samurai ever known — to protect his family from a vengeful demon. Kubo is armed with an enchanted shamisen, so you should expect a totally hypnotic soundtrack.

The full poster is below.

On the same day a really loud Ninja Turtles 2 trailer hit, it’s nice to see a studio like LAIKA give us a glimpse that animation can still be used for good.

More like this
Entertainment
6.22.2022 11:00 AM
20 years ago, Disney's most chaotic sci-fi experiment ever paid off
By Rebecca Long
Science
6.24.2022 1:30 PM
The best post-apocalypse movie of the century reveals a dark debate over humanity’s future
By Tara Yarlagadda
Entertainment
6.21.2022 1:00 AM
Game of Thrones sequel could ruin the best part of the series finale
By Alex Welch
Share: