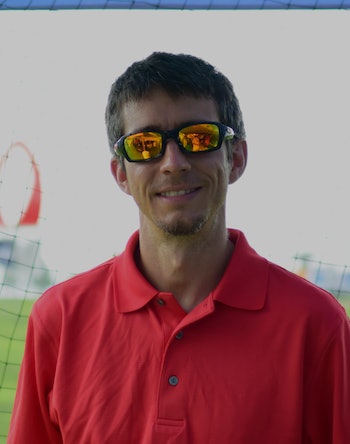 Brian Morris is antsy and frustrated. He’s got a limited amount of time to practice with his racing drone on Governors Island in New York City — just two days — before the Drone Nationals races begin. But the course isn’t ready. Instead, Morris, who flew in from Kansas with his girlfriend & part-time publicist Christy Vavra, has some unexpected time on his hands to ponder his top-ranked place in North American drone racing. He isn’t the top in the world, though — not after a teenager beat him for first place at the World Drone Prix in Dubai in March.

Yup, Brian “Brain Drain” Morris knows his time at the top is limited.

In Dubai, he came in second — good for $250,000. He’s also traveled from Wichita to compete in races in France twice and in locations across the United States. So Morris sits tinkering with two of his drones in a tent at the Drone Nationals, waiting for his practice run.

“The young guys are doing so well, and that’s what the old guys fear,” Morris says, who is closing in on 40. “I’m not scared of nothing. I’m just saying how it is.”

His orange-mirrored Oakleys reflect his branded, orange Sky Hero drones shirt every time he looks down to adjust a rotor. He has an interview coming up with one of the many journalists meandering around in the humidity. Drone racing is still trying to make its way to legitimacy as a sport, and Morris’s name is one of the first that comes up. Google search results make him an easy source for journalists looking for a quote on the sport that requires its racers to wear headsets that show the drone’s eye view as the flying quad-copters zip around a track filled with obstacles.

“He’s a very busy guy,” Vavra, says as Morris chooses one of his sponsor’s hats out of a pile. “He is either 100 percent on, or he’s sleeping, which doesn’t happen a lot of the time.”

On the second practice day, Morris and Vavra were out the door of their Brooklyn AirBnb by 7 a.m. They were ready, but Drone Nationals weren’t. That’s because ESPN — this was the first time the Worldwide Leader broadcasted a drone race — seemed to make the race about the show and not the competition. Despite Morris and the other 149 pilots not getting a real opportunity to run practice laps, the show went on.

Vavra immediately recognizes Morris’s tension regarding the lack of practice time. She’s an important part of Morris’s life both on and off the race course. Vavra and Morris have been together for three years now, and, she says, their “date night is watching the 3D printer at his house” print racing drone parts.

“He appreciates that,” Vavra says. Much of their relationship is racing-centered. “We both know his time at the top is limited.”

Morris has always been a tinkerer. When he was young, his dad bought him a ham radio, which meant that Morris needed a code name. So his dad dubbed him “Brain Drain,” because “talking to Brian for five minutes would drain a person’s brain,” Vavra says. It’s now the name of his YouTube channel.

Morris’s path to drone racing started 13 years ago on a field at Wichita State University. He was driving by and saw a remote controlled helicopter flying around and thought to himself, “I’ve got to get one.”

When it came to flying RC helicopters, Morris practiced and practiced.

“I about went broke (flying helicopters),” Morris says. “I had to wait until I got a decent job, but by 2004 I was doing helicopter demos.”

By day, Morris is an IT specialist. His dedication and practice have switched from RC helicopters to quads. He sometimes flies during his lunch break, and always after work. Morris’s typical night then includes working on his drones, going to bed around 1 a.m. and then waking up around 7 a.m. to start the routine all over.

Morris has sponsors and takes home a bit of prize money when he wins races, but it’s impossible for him to make a living racing full time. It’s a balancing act.

He’s not alone. Other winning racers juggle jobs and drones, as big-name sponsors debate whether or not to drop money on such a new sport. The live ESPN broadcast and Mountain Dew sponsorships — the soda brand hosted a “Day of Drones” event earlier the same week — are making it easier to be a full-time drone racer, though. GoPro and AIG threw money into sponsorship spots. Anything close to a sustainable living from drone racing is off the schedule, though, and it’s hard to imagine any racer reaching the top of his or her capabilities in such an expensive sport while eeking out a living with a full-time job.

“We need to compensate racers,” Paul Kellett of DroneXLabs says. Kellett believes there is really only one way to push drone racing into the mainstream, and therefore give racers a salary: “We need to make stars out of people.”

But it’s hard to make stars out of racers in a sport that’s in its infancy.

On race day, Morris is as ready to race as he possibly can be. He still hasn’t run the track much, but he’s in the 11th heat and will be on the block before the end of the day.

It came time for Morris to race around 2:45 p.m. The announcer counted down the seconds to start time. Racers readied their thumbs on the control sticks. Finally, the buzzer went off.

His drone never had a chance. It went straight from the block to the ground. The five competing drones raced forward.

Vavra shot up from her seat on the bleachers. On stage, Morris took off his goggles.

“There’s an element of luck in what we do,” Vavra tells me before disappearing to find Morris.

The pit crew had put a propellor on upside down.

“Normally at an event we plug in, we bring it up to a hover, and we’re ready to go,” Morris says. “Here they didn’t let us do that. So there’s a million protocols that got broke that I always do to catch things like this.”

Back on the track, life moved on. Tommy “Ummagawd” Tibajia raced for a drone.

“Everything was put into this event,” Morris says afterward. “I haven’t even looked beyond it.”

Morris spends most weekends going to races, but he’s spread thin maintaining his drone ranking and working his full-time job. He wants to keep that position for as long as possible, regardless of what it takes.

“Brian is starting to feel the strain in racing,” Vavra says. “He has sponsors, but he needs a salary and to have things regularly paid for” if he’s going to keep racing at his current level.

On August 7, finals day at Drone Nationals, Morris wasn’t competing in the individuals race. He was, however, in the team race with team XDC. The team won first and will represent Team USA at the Drone World Championships in Hawaii in October.

Morris’s time at the top is limited, but it isn’t over yet.