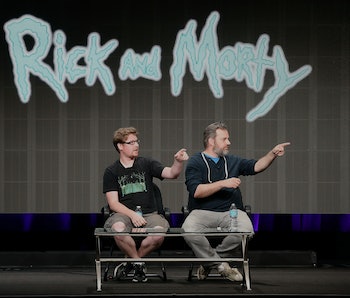 When a leaked fan video from the Rick and Morty presentation at this year’s San Diego Comic-Con first made the rounds, people couldn’t believe their ears. The minds behind the show — Dan Harmon and creator Justin Roiland — had taken a completely insane court transcript and simply reframed it in the voice of the show’s title characters. The concept of live readings or re-productions is as old as the first (or, probably, second) play known to man, but this one simply took the cake. Editing almost nothing from the original court transcript, Roiland and Harmon created an unforgettable short film that sent quite a few fans to look up the original case on Wikipedia.

The original fan recording was shaky and cut-off, but with a little bit of patience, Rick and Morty fans can now view the bizarre re-enactment of the State of Georgia Vs. Denver Fenton Allen — which occurred just this past June.

The original case made headlines locally, but it wasn’t until Comic-Con that it gained global acclaim. Chock full of expletives and death threats, it works perfectly within the context of the show — and sounds exactly like what the characters might say (on a good day, for Morty) in that situation, particularly the titular madman Rick Sanchez.

Denver Fenton Allen was hardly a criminal worth cheering for (he was convicted of murder, for anyone curious) but when re-framed by Rick Sanchez’s burps and slurs, the criminal’s disgusting words become hilarious. Allen had gone to court in order to request a different public defender and got into a heated argument with Judge Bryant Durham Jr., whose responses could technically land him into hot water with the district if his higher-ups decide to take issue with them — and now that their argument is gaining such notoriety, it’s anyone’s guess.

Either way, the full clip is now available in HD, and that should tide fans over as they wait for Rick and Morty’s third season, which premieres later this year.