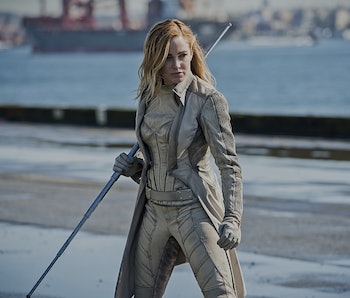 As a straight dude, I have the privilege of my favorite comics and TV shows almost exclusively pandering to me. I don’t often know what it’s like when a character I relate to on a fundamental level — because they behave or look like me — is killed off. (I should probably prepare for Glenn, though.) Representation matters, but what does it mean when one demographic is the norm?

This frustration hit the Arrow fandom hard when fan-favorite Sara Lance, aka Black Canary (played by Caity Lotz), was killed off in the show’s third season premiere in the fall of 2014. The CW series, based on the DC Comics superhero Green Arrow, had further expanded on the hero’s mythology the previous season by introducing Oliver’s longtime love interest, but Arrow diverted from comics with Sara, who was an original TV creation. She was written as bisexual and suited up as Canary instead of her sister Laurel (Katie Cassidy).

Arrow was quickly criticized for activating two troublesome tropes in one swift kill: fridging (killing a character simply to motivate the main hero), and for “burying gays”, in which the rare LGBTQ character is killed off, generally for cheap sympathy.

But under a year later, heads cooled when Lotz was announced as a member of the cast of the spin-off Legends of Tomorrow. In Season 4 of Arrow, Sara was resurrected with the help of a certain master of the dark arts and went on to Legends of Tomorrow as expected. In the show’s 16-episode run its first season, Sara experienced love, loss, and grief all while keeping her wits sharp and roundhouse kicks sick. Legends of Tomorrow had a great first season for many reasons, but one reason in particular was Lotz’s Sara, reinvigorated as the White Canary.

Was the wait worth it?

No one tuned in to Arrow when Sara was killed had any idea Legends of Tomorrow would be launching (and it’s unknown for sure if Lotz intended to explore other career options). This era of superhero movies with guaranteed sequels didn’t and doesn’t apply to TV; the spin-off may have been just a scribble on a post-it somewhere in Burbank at the time. Either way, to fans, when Sara died, she D-I-E-D.

It’s undeniably unfortunate that Arrow fell victim to tired tropes with Sara, especially within an otherwise great second season. Fans were pumped for Season 3 only to see it stumble out of the gate, ultimately ending up a mixed bag of a year. Arrow isn’t the smartest show, it isn’t set out to be all-inclusive and groundbreaking, and it isn’t aiming for Emmys. But it’d be damned if it didn’t always try to be just a good show, and a show is good in 2016 when it’s inclusive and groundbreaking. Bisexual superheroes on TV is a pretty progressive thing, especially in a mainstream, four-quadrant TV show on a network channel. It mattered Sara liked to kiss girls because of how it actually doesn’t matter.

But Legends of Tomorrow is another show, even if it’s the same universe, and Sara had a fulfilling role there. She fell in and out of love with a nurse in the ‘50s, dealt with loss by returning to the mysterious League of Shadows, and altogether tried to find a reason to live after being, you know, dead.

Her journey was interesting, emotional, and sympathetic. It’s hard to come back from the afterlife, and it’s even harder returning to normalcy (or whatever normal means when you’re on a time-traveling spaceship with Egyptian warriors and guys who can light themselves on fire). Sara was a soldier back from war, and Legends of Tomorrow was her emotional and spiritual rehab. We were there every step of the way, it just kinda sucks Arrow didn’t have a better way of starting it.