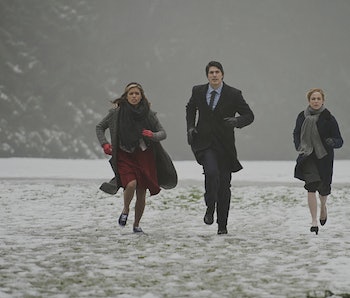 Sometimes, the only way forward is back. This is true for DC’s Legends of Tomorrow, as its newest episode, “Left Behind” propels everything forward — the show itself, the Arrow-verse, the superhero TV genre — in a breathless and exciting episode. End all doubt that Legends of Tomorrow is just a gimmicky team-up series, because it just may be the pinnacle of our collective superhero obsession.

Picking up from “Night of the Hawk”, Chronos attacks the Waverider, forcing Rip (Arthur Darvill) to take off, leaving Kendra Saunders (Ciara Renee), Ray Palmer (Brandon Routh), and Sara Lance (Caity Lotz) stranded in 1958. Waiting for Rip’s return, they adjust and before they know it, it’s 1960.

But while Kendra and Ray settle into a quiet life, Rip, Jax (Franz Drameh), Dr. Stein (Victor Garber), and Snart (Wentworth Miller) fend off Chronos, who takes Snart with him. At last, they return for their teammates. Only minutes passed for the Waverider, but it’s been two years for Ray and Kendra. Kendra is eager to return while Ray feels conflicted. They all warily attempt to re-recruit Sara, who’s returned to the only home she has: Nanda Parbat, with the League of Assassins.

In just one episode Legends of Tomorrow makes the most out of its time-traveling while diving deep into the Arrow mythos. Time travel is best when it’s more than jokes about inevitability (in “Left Behind” Ray inadvertently gives Mr. Gates a name for his son: Bill). There are consequences to this stuff, losses of both time and potential, and Legends nails this tension. Doctor Who perfected this in the neo-classic horror “Blink”, and Legends has its own worthy entry with superheroes — reincarnated Egyptian gods and genius billionaires — having no match against the power of time. The conflict is compelling.

“Left Behind” also works because it indulges in the DC Arrowverse, as it should, for a show of its caliber. When you’re Sara, a resurrected ninja stuck in 1958, what can you do? Return to Nanda Parbat, of course. It’s perfect: the only place Sara feels she belongs is with the League, the dark order she fought so long to escape in Arrow. Being there for fifty years before she actually joins is a rare luxury.

Sara’s return to the League, however brief, only works because of the strong mythology the Arrow-verse has built. That’s baffling when you consider Warner Bros. rushed the Justice League universe out of the gate, helmed with Zack Snyder’s flaccid and nihilistic Batman v Superman, a film which prioritized world-building over a cohesive, narrative core. “Left Behind” was the opposite, telling a good story about loss and abandonment while using its unique world as a tool, not being enslaved to it. (Also, the show deserves points for getting Matt Nable to reprise his amazing version of Ra’s Al Ghul.)

And Sara is only part of why “Left Behind” works! At last, we know the fate of Heat Wave (Dominic Purcell), the ex-partner of Captain Cold. Presumed killed by Cold, he was only left behind until he was picked up by the Time Masters. Yes, Heat Wave is Chronos, the Boba Fett Space Terminator dude hot on the team’s tail all season long. Like Sara, Heat Wave’s resentment is another dive into the Arrow-verse, but it’s an intimate conflict, growing between two men who are bonded by a criminal brotherhood. They aren’t legendary warriors or supreme beings, they’re just thieves who had each other’s backs since juvie. That they’ve been tossed into a huge world they were never prepared for is an enthralling story on its own. If there’s any negative detailing in “Left Behind”, it’s just that the episode does juggle too much, but the show has remarkable pacing considering its exhaustive laundry list of boxes to check. Watching Legends has become a full-throttle experience.

DC’s Legends of Tomorrow was always going to be fun, but I never thought it would be this good. A time traveling superhero series conjures up Saturday mornings with cereal or after-school blocks you watch to put off homework. I didn’t think the show would be worthy for primetime, or take itself and its audience earnestly enough, to earn a spot on my DVR. Little did I know, all the show needed was time.