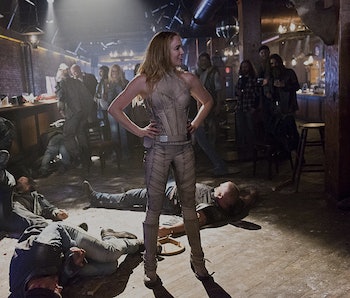 Because you demanded it, or at least keep tuning in for it, the CW is sticking with what works and is offering us another superhero spinoff. The Hulk-sized success of Marvel is a still undeniable, but can DC make the same sort of toyetic waves on the small screen? Will fans be overwhelmed or join the ride on a weekly basis? With only one episode under its belt — and plenty of questions as to its viability for a second season — there is no clear answer yet, but we are off to a great start.

Beginning in the year 2166, time traveler Rip Hunter seeks to prevent the domination of immortal dictator Vandal Savage by recruiting a specific group of gifted individuals all of whom are existing B-listers from DC’s Arrowverse. Enticed by the promise of becoming legends, these super egos join Rip Hunter only to find out why they’re chosen, by the end of this breathless, relentlessly paced pilot. Despite its frenetic pace, the show is as fun as it is bright and colorful — everything you might expect from a comic come to life. While the tropes of angst, grief, and revenge are still there, the show manages to capture a level of fun few of its peers consistently deliver.

Legends of Tomorrow’s actors are fine, with some standouts already emerging. Victor Garber’s Professor Stein stands head and shoulders above the rest, doing the most he can as a Broadway vet delivering Saturday morning science. Granted, the electricity that made The Avengers sizzle isn’t quite there … yet. The Avengers didn’t succeed because they dazzled us with explosions and colorful costumes. The real thrill came from the intimacy viewers had with these individual heroes and the thrill of finally seeing them share the screen. Marvel also benefited from impeccable casting with the likes of Robert Downey Jr. and Mark Ruffalo (whose performance easily made everyone forget Edward Norton). No one of that scale has revealed themselves here. For now, Legends will benefit from helping viewers familiarize themselves with these heroes and letting their various dynamics settle.

There’s still a dozen or so hours left in the Legends of Tomorrow party, a true celebration of the Arrowverse that hopes to start its own traditions. Thus far, it lives up to that hype it has been tracking in the multiple Arrow and The Flash team-up episodes. DC has successfully set the stage for a big, loud superhero extravaganza for the foreseeable future; let’s see if they can deliver.