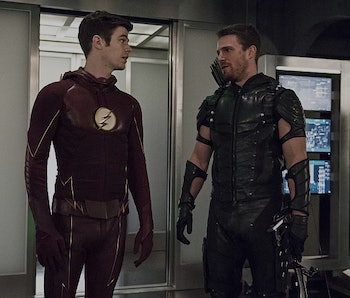 When it premiered in 2012, Arrow was a superhero show that didn’t want to be about superheroes. It hoped to differentiate from the “Superman’s Creek” that was Smallville, so Oliver Queen aimed his bow at organized crime, serial killers, and corrupt officials. But Arrow premiered at an awkward time when the geek palette, weary of grit, began to shift: Christopher Nolan’s realistic Batman trilogy climaxed with a shrug, while Marvel heralded a new era with The Avengers, a Saturday cartoon turned blockbuster. Three years later, the second two-part crossover between Arrow and spin-off series The Flash, “Legends of Today,” exhibits how much Arrow has embraced its destiny: Being a superhero show.

Strictly speaking, the first hour of “Legends of Today” is an episode of The Flash, a superhero fantasy since minute one. But this is the Arrowverse, a world that Arrow started. Their stylistic cinematic similarities and prominence of Arrow characters made it easy to forget this episode was actually The Flash. In the packed and breathless hour, Team Arrow confront ancient Egyptian warriors, the immortal dictator Vandal Savage, and their own enemies of Indochinese ninjas led by Ra’s Al Ghul. When Oliver Queen fired arrows at Hawkman and Vandal Savage, it felt natural, not out of place.

The inevitable change has been a long time coming, since Barry Allen was struck by the particle accelerator and was gifted with superhuman speed. But Arrow tried hard to keep comic book absurdity at arm’s length. Whatever adventures Barry went through, it happened in The Flash, out of Starling City limits. At the time, Oliver clashed with Deathstroke, a mercenary powered by enhanced drugs. That’s (unfortunately) not a far cry from the horrors of the real world, so despite its Jackie Chan choreography, Arrow was still plausible.

Then came the third season, a slow burn for the metamorphosis. Ra’s Al Ghul became Starling City’s newest threat, who wielded magic previous enemies didn’t, but there was a template for a realistic take on the DC villain: None other than Nolan had showed them how.

But Arrow used Ra’s to make mysticism the norm, and this season thus far has seen Green Arrow fighting metahumans and resurrecting the dead, solidifying Arrow as the superhero series it didn’t wish to be.

Change can be a good thing, but for Arrow it’s been the only thing. Gritty superheroes came out of a pessimistic, post-9/11 environment that had suspicion of authority, so audiences flocked to watch super individuals uphold their own justice. But now that view is dated, often toxic, and while there is still suspicion of armed authority, superhero shows like Arrow and Supergirl etch their vision of an optimistic compromise. There were little moments in “Legends of Today” that further showed how different Arrow has become, like Felicity’s hilarious bragging during their fight with Damien Darhk and Oliver actually apologizing for his outburst despite a legitimate reason.

Oliver Queen has come a long way from being a mopey Batman with a bow. He’s Green Arrow. Joining with superheroes has always been kinda his thing.