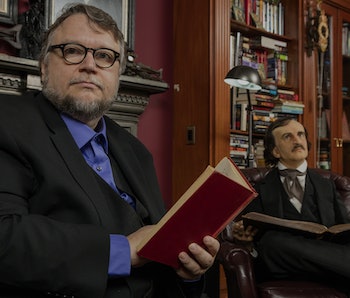 The very first work of art one encounters after entering Guillermo del Toro’s new exhibition at LACMA is a design sketch from his film Pan’s Labyrinth. The Early illustrations of the film’s heroine, Ofelia, look like they could have been torn from a Lewis Carroll book: drawings of a young girl standing at the gates of a very strange wonderland.

The exhibit, “Guillermo del Toro: At Home with Monsters” is described as an “amputated arm”, the personal art collection from the Mexican director’s home, which he calls “The Bleak House” (a reference to English author Charles Dickens). The exhibit, which runs through November, is a cathedral of oddities and beauty. It runs the gamut of art both fine and grotesque, with an eye on del Toro’s monsters and his beloved heritage.

Raised in a traditionally Catholic environment, del Toro told the press during a Q&A that he was uncomfortable with his surroundings as a child. “When I was a child,” del Toro says, “I didn’t relate to the saints and the holy men…I related to monsters. I saw my saints in the Wolfman, the Creature from the Black Lagoon.”

Frankenstein’s monster, in particular, had a profound effect on the filmmaker as a child. So much so that an entire section of the exhibit is dedicated to the creature, whom Del Toro views as a fragile – and vulnerable construction of disparate parts.

The exhibit space is a winding maze of crimson walls that make the place feel more like a Victorian house than a pristine art space. The gallery entrance features a large statue of the Angel of Death from Hellboy II: The Golden Army. From there, the exhibit is broken up into chapters. “Childhood and Innocence” explores youth as interpreted by del Toro. Several of his films feature young protagonists who have access to alternate realities and faced with threat of death. There are sculptures of a young Mako Mori from Pacific Rim alongside rows of genuinely terrifying concept art from Disney animated films like Sleeping Beauty and The Legend of Sleepy Hollow.

Next is “Victoriana” which, much like its namesake literary period, is a strange fusion of Victorian elegance and industrial-revolution styled nightmares. Steam- punk oddities and naturalist bug collections sit beside the Victorian gowns worn by the women characters from del Toro’s Crimson Peak. Alongside a little area which houses del Toro’s classic manuscripts, is a room he had installed called the Rain Room. Amid a wax sculpture of Edgar Allen Poe is a false window which simulates an endless thunderstorm.

“Magic, Alchemy, and the Occult,” in turn, is a dedication to American horror writer H.P. Lovecraft, Eldritch abominations, and other dark magic. Alongside several sculptures of Lovecraft are artworks and prints that show off nightmare dimensions and tentacled oddities. A testament to how eclectic the collection is, was the presence of an illustrated concept art from James Cameron’s film, Avatar. This unused concept showed off an unknown film that easily fit in with the rest of the Lovecraft-themed collection.

“Movies, Comics, Pop Culture”; “Frankenstein and Horror”; and “Freaks and Monsters” follow with various works of art that correspond accordingly. Mike Mignola’s work as the creator of Hellboy adorns the Pop Culture wall; several wax figures of Boris Karloff’s Frankenstein’s monster are erected in various alcoves. His various creatures from all of his films are on display on shelves along with props from Hellboy and Pacific Rim.

Del Toro has a strong love for his Mexican identity. An entire room in the “Movies, Comics, Pop Culture” wing of the exhibit is dedicated to Mexican masked wrestling, Lucha Libre. Artworks by the Spanish romanticist Francisco Goya, who combines scenes of Spanish history with dark details, can be found near animation stills from Disney films.

The final chapter is “Death and the Afterlife” which incorporates the traditional skull motifs from his native Guadalajara, Mexico, to props from Francis Ford Coppola’s Bram Stoker’s Dracula. As one exits the exhibit they are flanked by the famous “Pale Man” from del Toro’s Pan’s Labyrinth. A final nightmarish visage before exiting back into the sunny Los Angeles climate.

In each exhibit is a television screen, which play a mixtape of scenes from del Toro’s body of work that spans from his 1993 film Cronos to the television show he produces, The Strain. Each edited video corresponds with a particular chapter in the exhibit. To see his influences and the films he creates as a result of them is truly an amazing experience. Direct parallels could be drawn between the squishy monsters in Hellboy with the works of Lovecraft, the monsters in Pacific Rim with Japanese and Mexican myths, and the shadow of Spanish history over Pan’s Labyrinth.

“I think as humans, we are repulsive,” del Toro told the audience with a hint of sadness. “We are bad because we live in the pretense. We have invented a series of fantasies that we accept socially that are absolutely terrifying. Stuff like geography, gender, race.” For del Toro, humans have constructed a horrific facade under which they commit unspeakable horrors. Monsters, for all their imperfections, have the freedom to be monstrous. They are, as he notes, “patron saints of otherness.”

Near the end of the Q&A, del Toro grew somber. “There’s nothing more scary than people who are profoundly ignorant, and profoundly certain,” he said in reference to today’s politically charged climate. “This time, the monsters are wearing finely tailored suits, it’s important to tell them we are a rich and diverse community,” del Toro proudly declares, “I am Mexican, I love monsters, kick me out!”

Guillermo del Toro’s films wouldn’t seem like the work of a politically charged filmmaker. But in both the way he speaks about monsters and the art that has influenced him, it turns out the man is electrically political. “I think that every genre is political… but probably nothing is more political than fantasy,” which is the genre del Toro most closely associates with. “When a story teller feels that he or she is free from the constraints of reality, they show themselves more fully.” And looking back at the occult Nazis in Hellboy and Spanish Francoists in Pan’s Labyrinth, is the sudden realization that del Toro has been fighting back against fascism in many of his films.

Influenced by the works of western civilization, del Toro channels the fears of the west through his unique lens. Much like Frankenstein’s monster, del Toro is built with the components of all sorts of different artists and genres, and they’ve come together to form a revitalized being.

“What would be a single piece of art you would take to your grave?” is one of the submitted questions for the Q&A. Del Toro says he wouldn’t take anything with him, that if he had his way the Bleak House would stay as is. After his death, which he hopes is both peaceful and natural, he dreams for his home to act as a creative space for visiting artists and writers who might seclude themselves among the works of William Blake, Francisco Goya, del Toro, and Lovecraft. In that moment, it’s clear that del Toro’s Bleak House isn’t a museum or collection, but a beloved space of a man who only wants to play with his toys and create powerful stories about beautiful monsters.