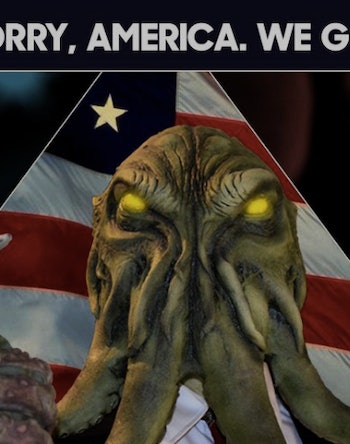 There’s something waiting. It’s ancient, inhuman, terrible to behold. And it wants your vote this November.

But wait, you say, Ted Cruz dropped out a while ago. Get with the times.

No friends, we’re talking about Cthulhu 2016. The elaborate satire campaign recently scored a major endorsement from the monster maven himself, Guillermo del Toro.

(Incidentally, the url that del Toro tweeted redirects to a Tumblr page advocating for Cthulhu during Spain’s last presidential elections).

More people than ever have seized upon the idea of democratically electing Lovecraft’s monstrous, dreaming alien god to be our overlord, because, like, it’s gonna happen anyway – and also, we’re so tired.

Our cultural reverence for Cthulhu has blurred the line between fiction and reality, and satire and sincerity. It’s difficult to pinpoint exactly why Cthulhu has captivated us so. The self-styled Cult of Cthulhu is home to enthusiastic horror fans, conspiracy theorists, and those eager to “be eaten last”.

Take a brief look at the Cthulhu for America and you will see slick website design, some obvious but excellent riffs on Obama’s 2008 campaign logo, and Hillary’s current one, and rotating banner images of smiling stock models with increasingly hilarious slogans. There are regular, elaborate news stories and a full spread of merch for sale. You have to go a few pages deep to find this disclaimer:

Meanwhile, their four-page press information sheet reads: “Many humans are under the impression that the Cthulhu for America movement is a joke candidacy, like Vermin Supreme — a way for people disgusted by a political system that has long since perished to voice a vote for a greater evil to end the status quo and the world. They have never been so wrong, yet so right. Cthulhu is no joke.”

Some of Cthulhu’s policy points include “Implement equality through insanity”, “Legalize human sacrifice”, and “Keep climate changing”. Some of the logic is… pretty solid, actually.

There is a probably-small, but vocal minority of despondent voters vowing to choose Trump because they feel our country deserves to end in a massive garbage fire from sea to shining sea. “He’s the president we deserve”, they will argue. These are the voters that Cthulhu is wooing with his “Best Evil” campaign.

The idea and the slogan—“why vote for the lesser evil?”—have been floating around the internet since at least 2008. This video does not seem to have been part of an organized effort.

In 2012, Cthulhu had a campaign website, although it was much less sophisticated and the corresponding Facebook page had only 1,666 likes. Cthulhu’s Press Secretary Samir al-Azrad tells me via email that the current team was not involved in these other efforts, but merely one of hundreds of cults out there. “We all serve His will in various ways. This year our cabal was selected by Him to bring the campaign out of “fringe novelty” and into a far more visible and viable state.”

Here I should note that Mr. Al-Azrad’s name is an allusion to a Lovecraft character, as are the names of the other campaign staffers listed on the site. Indeed, a quick reverse image search confirms that Mr. Al-Azrad’s real identity is “happy arab businessman posing standing with folded arms isolated on a white background”.

The campaign staffers have LinkedIn profiles, hiring announcements, and complete resumes. The site may be satire, but it’s so dedicated and complete, I find myself feeling like an old person who believes Onion headlines. Amid the fake news stories, there is a fake April Fool’s post. There is a complete speech transcript. It contains fewer exclamation points than Donald Trump’s campaign site. Mr. Al-Azard remains in character during our email exchange.

Some further fine print reveals that the website is copyrighted and operated by “Devil Olive”. Devil Olive is an Austin-based seller of “freak geeky tees and sundries” on a number of platforms. Is Cthulhu 2016 nothing more than an elaborate marketing scheme?

Mr. Al-Azad has a reasonable response to my accusations: “Devil Olive is one of several subcontractors we use for campaign services. Every political campaign sells swag as a means of promotion as well as supplementing fundraising. We are no different - but we’re not as tacky as the Clinton campaign selling spatulas and socks!”

My deepest sympathy to anyone who was holding out for a Cthulhu 2016 spatula.

There’s nothing wrong with selling some amusing swag. If the campaign wants to give me any kick backs for this publicity, I like the “No More Years” bumper stickers. But what about the straight donations they solicit? The campaign doesn’t reveal how much money it’s raised, but at least 12 individuals have paid $9.95 to officially curse one of their enemies.

Al-Azard maintains that all proceeds support normal campaign operations and the “dozen or so staff, interns, and volunteers”. He adds that “a sizable amount is used to pay off local officials so sacrifices during our rallies are not disturbed or investigated.”

At this point, I’ve had such a good time with Cthulhu for America, I’m willing to accept that whoever is behind it deserves our dollars more than most politicians. I’m also inclined to believe it does involve a small team to maintain this high quality, beautifully crafted ruse.

It’s unlikely you will actually see our overlord on the ballot come November. While their Twitter account has over 25,000 followers, a Change.org petition to get Cthulhu on the ballot has garnered only 152 signatures in 9 months. The campaign is officially a write-in one, although they “don’t see it as a barrier to victory”.

As disillusioned as we may feel about the state of the world, Inverse cannot in good conscience advise voting for a fictional monster.

It’s been said that merely gazing upon Cthulhu can drive humans insane. Maybe he has already appeared before us. Come to think of it, that may be the most reasonable explanation for this entire election cycle.