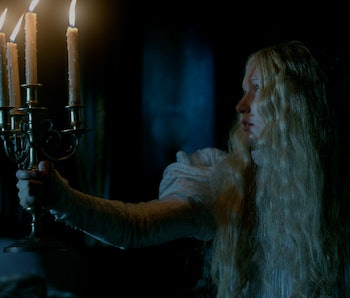 The gothic aesthetic is one of sprawling ruins and crumbling walls, barren landscapes and monstrous creatures: beautiful things that have fallen to decay. The genre has a long history, flourishing in the 18th and 19th centuries with works like Dracula, The Castle of Otranto, Frankenstein, and The Monk. Since then, it has never vanished, tending mostly to flicker in and out of the cultural mainstream. But with Guillermo del Toro exploring the gothic in his new film Crimson Peak, Victor Frankenstein hitting theaters in November, the show Penny Dreadful going strong, and Mary Shelley’s Monster coming out in 2016, we’re in a moment of gothic resurgence. It’s exciting — who doesn’t love inner demons, haunted houses, sinister aristocrats, and hints of incest — but it also raises the question, why now?

“Whenever we’re going through periods of upheaval or civil unrest, the gothic is very appealing,” says Ellen Ledoux, an English professor at Rutgers who specializes in gothic literature. “The Victorian period, when the British empire started to decline — that’s when you have narratives like Dracula and Jekyll and Hyde.”

Civil unrest like the Baltimore and Ferguson riots, threats on women’s health, school shootings, California’s drought, and Congress’ unprecedented intransigence doesn’t seem like it would manifest in period pieces about monsters and the Victorian era. But it also makes a strange sort of sense.

“The prevailing theory is the reason people like gothic narratives is they allow us to displace contemporary concerns into a fantasy environment and we experience a group catharsis,” Ledoux says. “Just how football allows people to release aggression in controlled environment, movie theaters allow you to explores ideas of contagion, rape, imprisonment — but we know it’s a fake environment, so we can experience them at a distance.”

Crimson Peak, which opens on October 16th — see our interview with its costume designer here — does not deal with contagion, but it is throughly saturated in gothic ideas and motifs such as crumbling houses and aristocracy gone to seed.

“The gothic really comes into being in the 1790s, where you have this huge backlash against aristocratic decadence,” Ledoux says. “Gothic space is all about interiors, being entrapped, being lost in the darkness. The home is often thought of as a prison. Women aren’t afraid of what happens in public life, they’re afraid of private life.”

Anne Williams, an English professor at the University of Georgia who also specializes in the gothic, explained that the haunted house metaphor begins with the self. “We are all haunted houses with these spaces within us which are not quite available to the conscious mind and there are terrible things in the dungeon,” she says, adding that the gothic, likewise, is constantly evolving and difficult to define cleanly.

But all gothic narratives, no matter how they differ, deal with the monster within.

Ledoux explains that Crimson Peak’s narrative model — a haunted house, a romantic hero, and an ingenue — goes back to Ann Radcliffe. “Where a young innocent women is in this large gothic space, threatened with things like rape and extortion or taking away property — you have Jane Eyre in 19th century, then Rebecca in the 20th century. These narratives seem to resonate even though women’s situations are different. They always track at moments women are pushing for change.”

Ledoux said it isn’t surprising a popular gothic film is surfacing at this moment in time when we could potentially have the first female president. “Right at this moment, women are gaining in political and public life,” she says. “But at the same time, they’re still victim of sexual violence in private. Their personal lives haven’t changed much. The gothic explores issues of domestic insecurity.”

Although the damsel in distress is a common gothic trope, “it’s not like women are victimized,” Ledoux says. “Often this fantasy realm is one where they do better than the real world. Women authors use gothic space to think about terrible things that might happen, but the heroine circumvents them and shows women being capable and able. It’s quite different from a horror movie where she just stands there and screams while someone comes there with a chainsaw.”

While Crimson Peak plays in the realm of domestic insecurity, showtime’s Penny Dreadful mixes the gothic with horror. Williams notes two long traditions in gothic: A terror tradition dating to Ann Radcliffe in the 1790s, which is focused on psychological torment. And a horror tradition, she says, “goes back to Walpole and Lewis where horror is a visceral physical reaction — what Stephen King calls the gross-out.”

Penny Dreadful is equally at home with elegant opulence and horror, both of which are present in the infamous blood rain ballroom scene. In that regard, Penny Dreadful and Crimson Peak deal with similar regions of the gothic.

But Victor Frankenstein and the upcoming Mary Shelley’s Monster deal with an entirely different gothic area.

“The cliché about Frankenstein is it was one of the first works to express anxiety about the implications of technology and science,” Williams says. “What’s more interesting is looking at Frankenstein as a birth myth. The horrors and terrors of maternity. Shelley’s own mother died giving birth to her; she had a miscarriage, her half-sister committed suicide. Frankenstein is a scientist, but he makes a baby and abandons it.”

In the many manifestations of the gothic around in movies, television, fiction, graphic novels, Williams says, anxieties around boundaries are a pervasive theme — the borderline between reason and the irrational. “There are many terms one could add to that binary pair,” she says. “There’s always several things going on at once. The danger is trying to pin it down to one answer.”

Don’t let the wanton bloodshed and embroidered language throw you off: The gothic moment we’re having now is about the present as much as the past. Use it to your advantage, to see how we’re navigating anxieties, terrors, and irrationalities now. None of those things have ever really left.

More like this
Entertainment
8.17.2022 1:30 PM
The one incredible Marvel movie you need to watch before She-Hulk
By Dais Johnston
Entertainment
8.3.2022 10:00 AM
Lightyear’s post-credits scene secretly sets up a nostalgic Pixar sequel
By Dais Johnston
Culture
8.3.2022 9:00 AM
7 amazing sci-fi shows and movies coming to HBO Max in August 2022
By Robin Bea
Related Tags
Share: