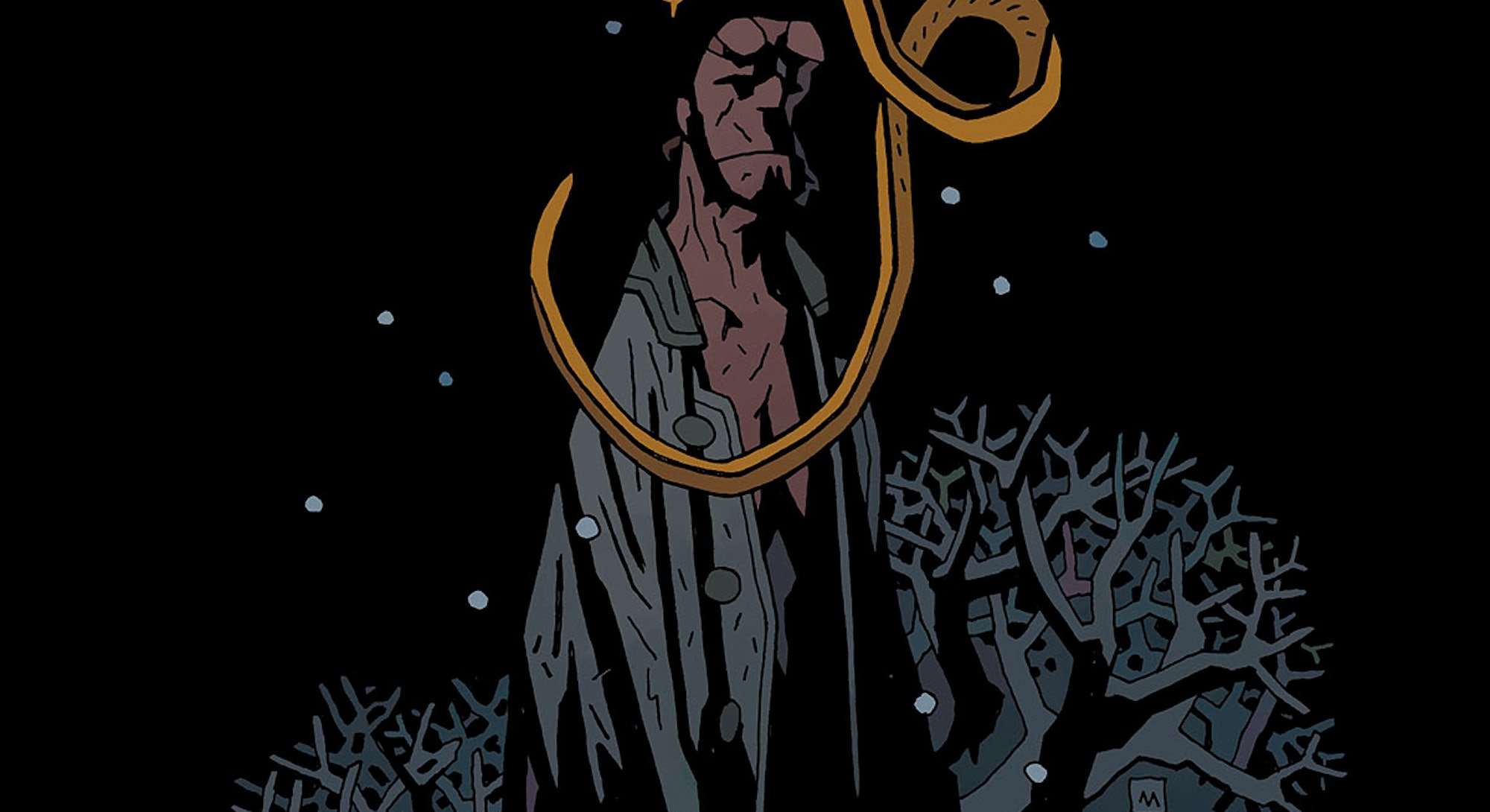 Artists have interpreted the concept of “hell” for as long as they’ve had access to paint and religious texts. Illustrating the underworld has captured the imagination of artists across cultures and religious affiliations; art is a cathartic venue conducive to the exploration of human suffering. So how does Mike Mignola, creator of comic book anti-hero Hellboy, interpret this specific abode of the damned, considering his fictional demonic spawn is currently serving a 10-issue sentence there?

Inverse spoke to Mignola on the phone this week, hoping to discover how the artist, along with his colorist Dave Stewart, fills his panels with the creatures, architecture, and motifs of all the dark things that he finds most fascinating and terrifying. Mignola’s commentary was illuminating.

Mignola says his first cover in the series was based on both earlier texts he’d read, and on his personal discomforting thoughts. Rather than dig into the existing versions of Hell however, Mignola wanted to fill Hell with his own original vision. “Other than the rough geography which I based on Milton’s circular hell, with Pandemonium in the center, it was really just made with stuff I wanted to draw,” Mignola says. “Usually when I do monsters, to some extent, I base them on something. I wanted something extremely alien-feeling.”

Mignola drenched his second Hellboy cover in red. As the character of Hellboy has always been associated with the color, subverting this, was a creative decision Mignola and Stewart purposefully pursued. “Red’s such a powerful color that I generally want to save it for something important. Not just throw it away for “Oh, Hell’s red!” One of the things I did in Hellboy in Hell, for the first time, we made Hellboy less red. Sometimes he’s blue, sometimes he’s gray. So I wanted to save the red stuff for, y’know, when we heat things up.”

We asked Mignola about the change in tone on his third comic cover, which appears quieter and more subdued than earlier issues. “I wasn’t super conscious of what I was doing, but [I like] this idea that Hellboy is drifting into this environment. That there is almost an acceptance of your fate, and that you are basically fading away. So some of the color basically reflects that. I wanted this quiet, dreamy kind of feel.”

On his dark, aquatic fourth cover, Mignola says, “Lovecraft has always been a big influence on me. Basically all his creatures were sea creatures. There is nothing to me more alien to me than a jellyfish, or the way an octopus moves. There’s something about that fluidity that I find really creepy and disturbing. So, to have Hellboy drift off into this chaos, unformed nothing, that meant everything had to be transparent.”

Hellboy in Hell lays out an intricate layout of the netherworld, where the fortress of Pandemonium sits at the center of a frozen lake. Surrounding the lake is a maze of old, 18th century European houses, and the action shifts from the first location to the next. When asked why he shifted the action from the castles of a fortress to a city, Mignola told us, “The architecture and stuff is just the stuff I would draw for fun. [The Three Gold Whips] is a very, very loose adaptation of an old Grimm fairytale so I always really liked the idea of the old-fashioned cities where these kind of stories happened.”

Mignola makes clear his love of taking images that inspire him in real-life and twisting them into his books as original reinterpretations. In ‘The Death Card’, the motifs of puppets reappeared from the first issue to take center stage when Hellboy fights a vampire from Prague. “Especially with the Prague story, it was really important to use puppets because when I first went to Prague, I did buy that puppet of the vampire of Prague [seen on the cover]. That’s where I learned the vampire of Prague, from the little book that came with the puppet.”

Hellboy in Hell began as a long project, but as Mignola began writing the stories, he found that he was gaining energy as he approached the finish line. As a result, Hellboy’s presence in Hell takes a serious toll on the character. “What was weird is to try to do this story where [Hellboy] gets sick. He’s already dead, yet the idea was that he was becoming more dead. He is something, so is there a danger of becoming nothing? And just that image of him as a half-skeletal figure, it was just a really fun image to do. So yeah, the idea of a guy wasting away and he needs to be cured, even though he’s already dead.”

Throughout the ordeal, Hellboy’s sarcasm soldiers through the dark atmosphere of Hell. While he quips throughout his journey, the character has been slowly wasting away (as seen in the previous cover). So when we see Hellboy back in action in this kinetic showcase for Hellboy, Mignola has very good reason for it, “I just don’t want to wallow in the gloom. And the cover before, the skeleton cover, was such a gloom cover. I tend to make up stories that to me at least are funny. And the idea that Hellboy would have to fight [a] dead cat I thought was funny. So, I thought, ‘well, it’s about time to do a funny cover’ which is why it’s the only cover with a word balloon on it cause it’s such an absurd image. Y’know, lighten it up a little bit because it’s gonna get darker after that.”

Hellboy in Hell has a feeling of finality to it. Hellboy is dead, he is in Hell, for real. While the character has always had a brush with the demonic and supernatural, he is now at the last stop. Mignola details how the series unfolded to become the end. “I always knew how [the story] would end… I plotted this thing out to be four books- twenty issues. And then at some point it kind of condensed down and became three books. When I finished issue eight… I realized when I get to that page, it was so much like the end of the series that I rethought everything I was going to do, and scrapped most of it and condensed the rest. So issue 10 is pretty much always the ending I was going to do, but 9 was the only brand new story. I had a different plot, but it was created to lead into issue 10, and explain a lot of stuff [for the ending].”