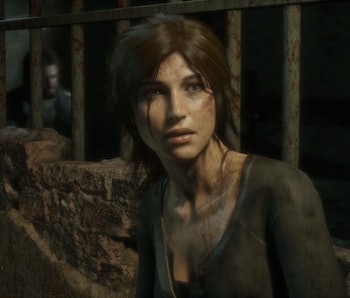 When Square Enix’s Rise of the Tomb Raider hits the PlayStation 4 on October 11, it will bring with it a new chapter in Lara Croft’s story. Called “Blood Ties,” the vignette tasks Croft with searching through her mansion to verify that she is, in fact, the house’s rightful heir. What makes this bit of content so remarkable, though, is the fact that “Blood Ties” has been constructed to work with the PS4’s newly minted VR headset.

For the first time in series history, players will be able to embody the most fearsome spelunker in gaming history (suck it, Nathan Drake) and plumb the depths of Croft Manor in a first-person perspective. We don’t know exactly what the gameplay in Blood Ties” will entail, but the thought of truly immersing ourselves in the role of one of the most popular video game characters of all time is almost too provocative to ignore.

The best case scenario is that Rise of the Tomb Raider’s brief dip into VR will mark the first of several forays that beloved game characters make into the medium. Dare to dream, right? If developers are going to start tossing some VR segments into upcoming titles, here are a few places they can start.

This one would be tricky to pull off, because it would really stride the line between action game and snuff film. However, the most recent iterations of the Hitman franchise have focused less on the visceral kill than on setting up the perfect murder. Seeing 47 operate on the sly — poisoning this fellow and loosening those screws in order to stage a silent hit — would be something worth playing.

Here’s a little wishful thinking in line with what we’re hoping to see from Lara’s adventure in “Blood Ties”. It would be an undeniable thrill to shimmy along a narrow ledge and then leap across an open chasm to grip a little bit of salvation with just your fingertips. Just try keeping your heart out of your throat.

Give us any minute aspect of Skyrim rendered in full virtual reality and it would be an instant sensation. And while a romp through the entirety of Bethesda’s Nordic fantasy land is pretty much out of the question, experiencing the “Hearthfire” DLC inside virtual reality would be incredible. Walking through your hand-crafted rooms and admiring your hard-won trophies would be the perfect peg at the end of a long day of messing up dragons.

The ideal sensation, here, would be charging through a hectic battlefield on horseback, leaping trenches as you charge an enemy encampment, flashes of artillery brightening the smoke-filled sky like lightning in a thunderstorm. Diving into DICE’s upcoming World War I game could also make history come alive in frightening ways never previously encountered.

Assuming that Bethesda imbues its old hero, Corvo, and its new hero, Emily, with the same kind of god-like fighting prowess that made the first game so addictive, playing through even one hit in the game in VR would be a big-time payoff.

Let me strap on a Stormtrooper helmet, deploy to Hoth and run through the tunnels shooting (and missing) Rebels and fleeing starships and I’ll never stop playing.

Some aspect of Mafia III is said to involve de-stabilizing the current mafia chiefs in New Orleans by taking over some of their existing rackets and turning them to your own end. Imagine strolling calmly into a storefront and staring the owner in the eyes as you break up his or her store with a baseball bat. That’ll teach ‘em to avoid paying protection.

Deus Ex: Mankind Divided doesn’t need much augmentation to get any better, but a virtual reality take on the game’s hacking mini-game, or its in-depth upgrade system could make for some pretty intriguing diversions … and can you imagine a a title with more perfect lore in which to inject some VR?

Think of a virtual reality addition to The Division as something akin to its current player-vs.-player Dark Zones. It could be its own space populated by agents who then experience one or two blocks of a virus-ravaged New York in its entirety.

For strategy gamers, it doesn’t get much better than XCOM. However, it’s not without its flaws. If there’s one place where the tactical turn-based alien invasion simulator is lacking, its in the top-down view of XCOM’s home base. With the console port of XCOM 2 coming in a few months, it’d be amazing to get an opportunity to walk through the Avenger in first person.

Mass Effect Andromeda won’t have a Shepard or a Normandy, but one thing you can bet it will have, something that every Mass Effect game has, is a bar. Some seedy, neon-lit dive where Shepard will chat with the bartender and pick up missions from the shady denizens of dark corners as techno music straight out of an ‘80s sci-fi film thumps in the background. So, here’s my plea: BioWare, let us grab a drink in VR.

In 2014, there were few gaming sensations that eclipsed the pure satisfaction of hearing that sweet mechanical voice warn you to standby for Titanfall. Getting the chance to speed up to your faithful giant and suit up in a true mech power fantasy would be a gaming dream come true.

Just give folks a shot at taking a few laps around Monaco, moving at breakneck speed as the most opulent city in the world blurs by.

Playing as Jason might get a little real, to be totally honest, but running in terror from the unstoppable force of nature might just be good, hair-raising fun.