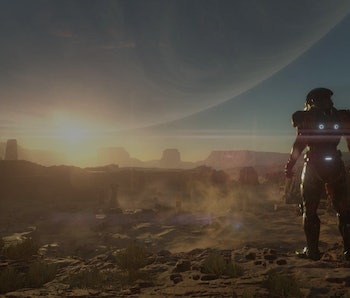 Andromeda’s trailer begins with a promise that BioWare will be going “further than ever before,” a goal reminiscent of Star Trek’s mission statement. In fact, everything about Andromeda evokes the freedom of space exploration the original Star Trek series captured all those years ago.

The video, which shows some of the development behind the new game, shows off bigger enemies, expansive new worlds, and brand new characters. Aaryn Flynn, general manager of BioWare, explained today that “at the heart of Mass Effect: Andromeda is a question, ‘How far will we go?’”

The video, which is light on story plot, hints that the mission for the player in the new game is to explore far-out planets to find a new home for humanity.

When the game was announced in 2014, BioWare mentioned that Andromeda takes place after the first three games, and in a whole new environment. This is evident from what appears to be the new main character of the series shown at the very end of the trailer.

Reports from Polygon say that the game will have a big focus on new alien races. The many different species of aliens that populate the Mass Effect universe have become beloved by gamers for their distinctive characteristics, and lovable quirks. While these new races aren’t present in the trailer, old familiar faces and vehicles return, as well as a brand new spaceship that the player presumably serves as a crew member on.

Get a look at the new trailer below. Mass Effect: Andromeda was originally slated for this holiday, but was pushed back to 2017 for further development.

More like this
Gaming
Jan. 25, 2023
Redfall is Bethesda’s vampire-infested co-op shooter — what to know
By Jess Reyes
Entertainment
Jan. 15, 2023
How to watch The Last of Us: HBO’s next mega-hit is finally here
By Claire Fox
Gaming
15 hours ago
13 years ago, one sci-fi game revolutionized RPGs forever
By Hayes Madsen
LEARN SOMETHING NEW EVERY DAY.
Related Tags
Share: