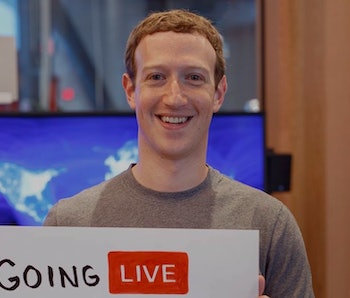 Facebook has a message for its users: get ready to watch endless streams of video in your timeline.

“We’re going to become video first,” Facebook CEO Mark Zuckerberg said during the second quarter investors call today. “There’s this trend where 10 years back, most of what you saw and shared online was text. Then it went through a phase where it was mostly photos. And then, five [years from now] or however long it takes, it will be video.”

Zuckerberg, COO Sheryl Sandberg, and CFO David Wehner repeated throughout the call that video is the future of Facebook. Video will be pretty much everything for the social media platform: ads will be videos, live video will expand, and even sports will go live on the site. Facebook announced it will live stream USA Olympic basketball, perhaps in an attempt to undercut Twitter’s live-sports streaming goals.

All of that moving picture content sucks up data, though, so Facebook is dropping a lot of money on network and server expansion. Although if it really wanted to help people watch more video on Facebook, it would pay for everyone’s mobile data plans, because Facebook is being consumed on mobile more than ever.

It makes sense: more short videos mean people will get used to stopping and watching the videos (since they will be short), and if all videos are short — ads and original content — people won’t just blow through the ads. Short videos are also key because, as Zuckerberg said, “you don’t come to Facebook to watch one piece of content.”

Video is already becoming an integral part of Facebook. The explosion of Facebook Live for both content producers and everyday people caused everyone to change the way they view their timeline. There was Candace Payne and the Chewbacca mask, which Zuckerberg specifically called out as a way Facebook Live is working. It’s not all funny viral content though — Diamond Reynold’s heartbreaking Facebook Live video of her boyfriend Philando Castile’s death at the hands of police officers was both a turning point in the conversation about police brutality and use of the medium as a tool for news gathering and social activism. Zuckerberg didn’t mention the latter video in the investor call, but he posted a comment shortly after Reynold’s stream saying that it was an example of why the world needs to be more open and connected.

While Facebook has struggled to balance its community guidelines and news gathering, it’s clear that the company is committed to sponsoring video content going forward.