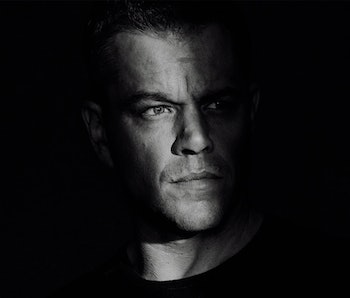 With the release of Jason Bourne on July 29, Matt Damon returns to the role that made him into a bona fide action star way back in the early aughts. The Bourne franchise was one of the most important and influential action series of the last decade, noted for its gritty realism instead of the increasing use of spy movie CG fakery.

And yet, despite (or perhaps because of) its incredible action set pieces — like the Waterloo Station sequence in The Bourne Ultimatum or the absolutely bonkers car chase in The Bourne Identity — the franchise isn’t particularly known for its deft storytelling prowess. And so, as a service to you, we’d like to catch you up with all all the convoluted twists and turns the Bourne series has to offer, from Damon’s debut in 2002’s original to the wonderfully forgettable 2012 spinoff The Bourne Legacy.

Universal had the same idea, and released a clip of Damon trying to recap the whole thing in 90 seconds, but unfortunately the video decided to breeze past some very important details about Damon’s amnesiac covert-ops character. While we don’t have 90 seconds, we can reiterate the Bourne franchise in 100 words** or less.

An amnesiac opens a Zurich deposit box after being rescued from the Mediterranean; inside, he finds money and various passports, including one labelled “Jason Bourne. A secret CIA black-ops program called Operation Treadstone, led by Conklin (Chris Cooper) and Abbott (Bryan Cox), is alerted to his presence. Bourne kills assassins sent to eliminate him after a woman named Marie (Franka Potente) drives him to Paris. He kills a final assassin (Clive Owen) and learns that his memory loss was caused by an assassination attempt on an African dictator (Adewale Akinnuoye-Agbaje) gone wrong. Conklin is killed before Bourne and Marie flee; the Treadstone program is decommissioned.

Bourne and Marie are exiled in India until a Russian agent named Kirill (Karl Urban) murders her and plants Bourne’s fingerprints at a CIA handoff for $20 million in stolen mission money. Falsely implicated in the murder of a politician named Neski, Bourne is tracked down by a group led by Deputy Director Landy (Joan Allen), but clears his name after she learns from Treadstone technician Nicky Parsons (Julia Stiles) that Abbott stole the money, ordered Bourne to murder Neski, and had Kirill retrieve the files and frame Bourne. Landy confronts Abbott and he commits suicide. Bourne tells Neski’s daughter the truth, apologizes, and leaves.

A journalist (Paddy Considine) learns that the decommissioned Treadstone was continued under the codename “Blackbriar,” causing Bourne to set an intelligence meetup with him in London. The journalist is assassinated on orders from CIA new director Vosen (David Strathairn). Bourne uses the journalist’s source to uncover the New York headquarters of Blackbriar, swipes top secret documents, and sends them to Landy to leak. There he confronts Treadstone creator Hirsch (Albert Finney), learns his real name and that he volunteered for the covert program. Vosen tries to kill Bourne, but he flees into the East River. News breaks about the criminal investigation into Treadstone and Blackbriar.

To prevent a Senate investigation from learning about Operation Outcome, a supersoldier offshoot of Treadstone, program head Byer (Edward Norton) sends a drone to kill operative Aaron Cross (Jeremy Renner); of course, Cross escapes. Meanwhile, all employees at a biomedical company supplying Outcome with bio-enhancement “chems” are killed except biochemist Marta (Rachel Weisz) who flees to her cabin. Cross tracks four assassins sent to kill her, stops them, and takes her to the Manila chem manufacturer to prevent withdrawals. A supersoldier (Louis Ozawa Changchien) follows them, but is killed before Cross loses consciousness. They sail to New York; Vosen tells the Senate that Landy leaked the Treadstone intelligence.

(**Not counting the names of the actors included for each film)

More like this
Entertainment
8.6.2022 1:00 PM
Static Shock live-action movie is "still in development," Denys Cowan says
By Eric Francisco
Culture
7.27.2022 11:30 AM
You need to watch the most underrated apocalypse movie before it leaves HBO Max this week
By David Grossman
Entertainment
7.24.2022 11:30 AM
35 years ago, DC’s worst movie ever almost destroyed its greatest superhero
By Laura Kelly
Related Tags
Share: