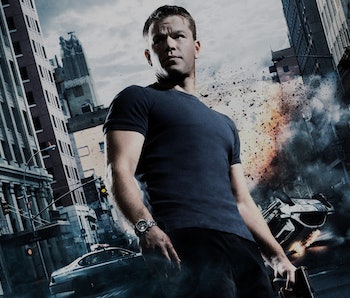 On Tuesday, Universal Pictures unveiled our first real look at Matt Damon’s upcoming spy picture, Jason Bourne, the fifth installment in the saga (and the fourth featuring Mr. Damon). As soon as the kinetic trailer dropped, fans of the series immediately set their sights on the films July 29th release date.

Of course, that excitement is totally merited. Not one film in the series which features Matt Damon has below an 80 percent on Rotten Tomatoes, to say nothing of the franchise’s firm place in the hearts of all action movie fans. Yet, it’s been nearly a decade since Damon stepped into the shoes of a super spy. Does the megastar still have what it takes to thrill audiences?

Okay, so let’s get into the facts of the trailer, which doesn’t stop or slow down, from the moment a shirtless Matt Damon punches some poor fella in the face.

From what we can tell of the plot (which is being kept secret), Jason Bourne picks up several years after the close of the most recent film, when the super spy finds himself wandering the world with no real purpose. Sure, he knows who he is, but that doesn’t necessarily make it easier to sleep at night.

Bourne’s emotional dilemma is being slowly vented one punch-y punch at a time, as the trailer seems to suggest that the former government agent is now paying the bills by entering vaguely foreign street fights. Of course, this in no way calls to mind another haunted soldier just trying to find peace with his past.

At any rate, it’s not too long before Julia Styles comes calling with the promise of more revelations laced with lots more punching, chasing, and shooting. It’s all very intriguing, except for the sad fact that the Jason Bourne trailer looked kind of familiar.

We’ve seen Matt Damon in this exact situation three times before, only this time his overarching goal — the quest for his personal identity — is over and done with. With that out of the way, Bourne’s entire motivation has been stripped away and we’re left believing that Bourne is going after the government for purely altruistic reasons (which has never been his bag).

There’s also the oft repeated commentary on Edward Snowden to worry about. In the film, Ato Essandoh’s as-yet unnamed character states, “We’ve just been hacked. This could be worse than Snowden.” Add to that last year’s statements from Matt Damon that the plot of the film would tackle “arguments about spying and civil liberties and the nature of democracy through an austerity-riddled Europe and in a post-Snowden world.” That controversial political angle could potentially ruffle some feathers depending on which side of the aisle you sit.

Why they’ll pull it off in July

Okay, all that academic bullshit aside, this movie will absolutely be worth your time, if only for purely visceral reasons. Paul Greengrass is a freaking action movie genius whose films are tense and thrilling and badass in a way that no other film can ever accurately mimic (sorry, J.J. Abrams). I mean, remember this?

And things only got better from there. The entire series is a tribute to the lofty heights that action films can achieve when they’re handled by real artists. Make no mistake, that’s exactly what Greengrass, Damon, and all the rest of the assembled crew are. Regardless of how frenetic and shallow the trailer was, you’re going to get a good dose of plot, character development and all that good arty shit.

Okay, let’s say that for basically the first time in his career, Paul Greengrass wrote and directed something mediocre. This is where part of his genius lies; Greengrass surrounds himself with talented folks who can elevate middling material into something special. Beyond the core cast of Damon and Julia Styles, Tommy Lee Jones appears to be taking over Joan Allen’s “sympathetic bureaucrat” role and Alicia Vikander looks to be stepping into the shoes vacated by the now rogue Julia Styles. Finally, Vincent Cassel, a man who was born to play a cunning evildoer, is on board as the villain.

In other words, even if the technical aspects end up slipping, the assembled on-screen talent should more than make up for it.

So, what can we expect?

The trailer we got yesterday wasn’t exactly anything new. There were even a few scenes that were eerily reminiscent of movies that don’t have nearly the reputation for challenging their audiences or renovating action films.

With the film’s pedigree, though, there doesn’t seem a whole lot to be worried about. Remember, the plot of the film is being kept under tight wraps, so we aren’t yet privy to the narrative elements that lend weight to the series’ adrenaline-fueled set pieces. Once we’re filled in on the real details, there seems little doubt that the combination of Paul Greengrass and Matt Damon will make for an excellent summer blockbuster.