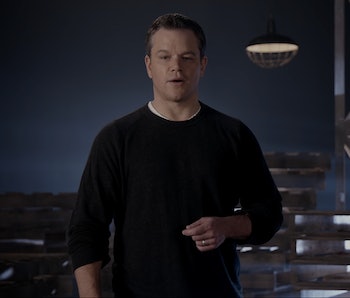 It’s been nearly a decade since Matt Damon appeared as amnesiac covert operative Jason Bourne on-screen, with the last entry in the series being the Damon-less offshoot The Bourne Legacy starring Jeremy Renner. That movie was supposed to be a franchise reboot, ensuring that the series could go on even when Damon wasn’t around. But it should have been obvious to all parties involved that people generally want Jason Bourne in a Jason Bourne movie, hence Jason Bourne, which hits theaters on Friday and brings Damon’s character back into the secret agent fold.

To catch everyone up on the four previous movies, which have a reputation of essentially being the same convoluted movie told over and over again, Universal has released a clip of Damon recapping the series to get everyone up to speed.

Conspicuously absent in the clip is any mention of Renner’s Agent Aaron Cross or The Bourne Legacy altogether. It seems the seemingly failed experiment at a “Bourne Cinematic Universe” is better left unsaid, unless we get The Bourne Legacy 2 in a few years about more brainwashed spies that aren’t named Jason Bourne. It could happen.

The clip itself, featuring Damon standing in what looks like the corner of a Home Depot somewhere, is basically a nice bit of fluff to remind you about all the awesome action set pieces that have come to define the franchise. There’s the pen fight in The Bourne Identity, the “epic close-quarters” fist fight with a magazine in The Bourne Supremacy, and the open ending of The Bourne Ultimatum which obviously leads into the new Jason Bourne movie.

Even in 90 seconds it’s easy to lose yourself in all the twists and turns involving secret CIA programs like Treadstone or Blackbriar, and it’s obvious that the main M.O. of these movies is to cast any semi-distinguished British or American actor to be the stuffed-shirt government stooge that has to be the scapegoat for what was done to Bourne to make his brain into scrambled eggs.

Step aside Chris Cooper, Albert Finney, David Straithairn, and Bryan Cox, it’s Tommy Lee Jones’s turn to be that role in the new one.

Still, it’s kind of awesome to see Damon back and kicking ass again. It’s easy to forget these movies have been the touchstone of early aughts Hollywood action. They initially tried to be the antidote to the jokey and suave spy action that typified the Bond movies, but they ended up causing 007 to be rebooted in a similar gritty style with Daniel Craig.

So what will a post-Bond-goes-Bourne Jason Bourne movie look like? Find out when the movie drops on July 29.