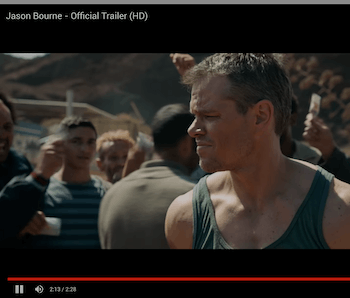 The first Jason Bourne trailer is out and it is absolutely bonkers. Matt Damon is back as Jason Bourne, Julia Stiles is back as former government operative turned Bourne sidekick Nicky Parsons, and they came back to do two things: kick the shit out of everything and chew bubblegum, and I am willing to bet there is not a scrap of bubblegum in this movie (ask Paul Greengrass — he’s back in director’s chair.)

Also, in addition to kicking, Bourne and Parsons are also here to drive cars through things, shoot things, punch things, hit things with broken chair legs, and also wreck shit. They may even chew bubblegum at some point, don’t ask me, I’ve only seen the trailer.

Let’s go through the checklist shall we? Grizzled Bourne with a salt-and-pepper beard knocking some guy out with one punch, Snatch-style? Check. Guy in a suit saying “Holy shit, that’s Jason Bourne!”? Check (Holy shit, that is Jason Bourne!). Bourne being very rude to people on public transportation? Check. Parsons helping Bourne remember something important about some government official whose shit he needs to fuck up? Check. Motorcycle chase? Check. Car chase? Check. Car chase where a SWAT car drives through a casino? Check. People shooting guns at each other on roofs? Check.

We also get new characters played by Alicia Vikander and Tommy Lee Jones, who are probably bad guys but possibly good guys? You decide, here’s the trailer:

Yeah yeah, we know this film might be a little light on plot unless it ends with Bourne’s death, but the tiny teasers we got yesterday have hype levels very high, and screw it, let’s just go back to the checklist:

Cheesy spy line like “We’ve been hacked. Possibly worse than Snowden?” Check. Verbatim. Someone saying “Why would he come back now?” Check. He’s back to fuck you up, duh. Bourne struggling with his past as a government assassin by assassinating the government? Check. Government employee who happens to be a beautiful woman wondering if she’s on the wrong side? Probably check? Vikander’s character could join Team BourneParsons, who knows? We’ll get to find out on July 29.