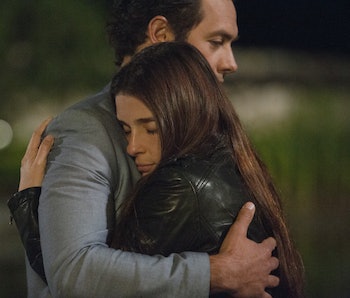 “Loose lips get waterboarded and their bodies get dumped in the desert.” The first UnREAL episode after last week’s disturbing and bewildering police shooting incident catapults us directly back onto the Everlasting… set. This is the strong, typical-Quinn (Constance Zimmer) one-liner that sets the tone.

That is: despite “bad PR” and headlines about the incident, business must continue as usual, with or without Darius (B.J. Britt). Details of what precipitated the event must be kept under wraps as much as possible; millions of viewers must be assured that Darius is his same old accommodating, Everlasting…-created, non-Angry-Black-Man self, fully committed to choosing a fake wife.

If viewers thought the last episode was messy, it’s nothing compared to “Fugitive.” It’s not that it’s poorly thought-out. Plot-wise — with all the interweaving schemes between characters to milk the ludicrous façade of Everlasting… for all it’s worth to them — it’s something of a marvel. But its off-handed treatment of Romeo’s (Gentry White) shooting is a storm cloud raining on the show. Quinn argues that the event was not police brutality because it was Rachel’s fault. Coleman (Michael Rady) is, initially, hung on the idea of telling the story of police brutality on the show without implicating Rachel (Shiri Appleby), until the somewhat-ridiculous unveil of Yael (Monica Barbaro) as a reporter prompts him to want to tell a different story. He has more control over spinning the story of Everlasting… in the world at large than telling stories within Everlasting….

This — his sense of being in control and self-importance — seems to be more important that what Rachel does or doesn’t want to disclose about the sordid foundations upon which the show is built.

Yes, Rachel’s crisis takes center-stage here, as one worried it might after last week’s dramatic cartoon-psych-ward conclusion. This is the story of UnREAL largely, but its cavalier attitude toward contemporary race-related issues as a side plot is deeply troubling. Rachel’s guilt matters most, and the shooting is subsumed into the trajectory of her character.

To redirect attention away from it – we hear his name only a handful of times in the episode, and are told he is fine” without being allowed to see him or hear his perspective – a capital-R Rape plot line is introduced. This is meant to solve the long-standing mystery of Rachel and her mother’s dysfunctional relationship, based — we know — in medical malpractice. Rachel also confesses the “murder” from last season, diverting the focus even further from Romeo. Everything spilling out at this moment feels forced – too much sensitive subject matter piled onto the trash fire that this chaotic, fidgety plot.

“Fugitive” might have been another genius UnREAL gambit: another complex reflection of how all that ends up mattering in this universe are house rules. What is important is how reality is made to appear, rather than what it is. The show created a twisted simulacra of humanity than directly reflecting it. Instead, however, “Fugitive” — like last week’s episode — feels like a disturbing aberration from which it seems unlikely that this season will recover.