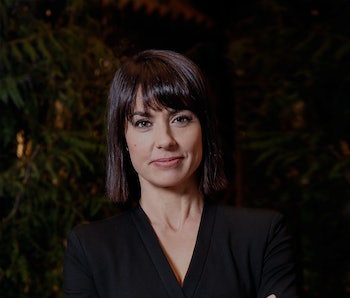 Shiri Appleby’s Rachel, typically, is the bedrock of Lifetime’s UnREAL: Her nuanced acting — ranging from lethal deadpan to scorched-earth explosiveness — keeps the farcical show’s humanistic heart pumping. But just as on the show-within-a-show, when push comes to shove and major change needs to be enacted, Quinn steps into the spotlight. Episode 3 is wholly Constance Zimmer’s episode — one of her finest performances yet on the series.

As we learned (once again) in Episode 2, Quinn believes that Everlasting… is her project, first and foremost, no matter who’s listed where in the credits. After all, when it comes to getting the very thankless dirty work done, it is her who is willing to plumb the depths; especially when it comes to overturning Chet (Craig Bierko), she is more than willing to get her hands dirty, or filthy. After all, she needs something bigger than a suicide this season to get her “kingdom” back.

In this episode — which feels like the season finally beginning in earnest — we see Quinn pull out every stop, exploiting her own unhappy childhood to get a contestant to implode on camera. To finish the job, she puts the subject, Miranda, in solitary confinement, forcing her to discuss her childhood abuse on camera, then hires an actress play her mother and discredit her story on-camera. It’s one of the mostly coldest calculated gambits Quinn and Rachel have pulled off on the show, and Quinn laughs triumphantly watching the action on the control room monitors. Eerily, it never feels like it was difficult for her to finagle.

Coleman (Michael Rady) is there to remind us that in some sense, what Quinn and Rachel (though he thinks, mostly Rachel) does is an art — a dark one, but a stunning talent, nonetheless. As Rachel guides Coleman through what she and Quinn do best, their mutual interest in one another deepens — going from skeptical curiosity to a realization that might share bonds that run far deeper than Rachel and Quinn’s tortured partnership. When Coleman tells Rachel that she “doesn’t need” Quinn, and moves so glibly toward making out with her, one wonders if ambition isn’t at the root of his maneuvers. The fact that he happily accepts Gary’s (Christopher Cousins) present of a car, which Quinn certainly deserves, is either a ornamental joke about white male privilege or a deeper indication that Coleman is unequivocally bad news. (He does, after all, gloat about his documentary too much for comfort, something which Rachel laps up, almost in spite of herself).

Quinn, on the other hand, does not. With Rachel in her crosshairs now that the truth about her secret meeting with Gary has come out, it seems like Quinn will be all the more eager to sabotage Coleman. He’s definitely in cahoots with Rachel, whether it’s truly because he respects her, or he has a shifty plan. Everyone manipulates everyone on both UnREAL and Everlasting…; it’s, on both fronts, part of the bargain, and probably, what one needs to do to survive, as Jay (Jeffrey Bowyer-Chapman) so often tells Ruby (Denée Benton). Why would Coleman stop himself from joing in? Though this episode finds Quinn at her most diabolical, there’s no reason to think she can’t delve deeper now that her closest associate has betrayed her.