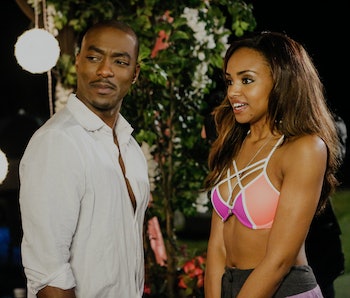 The second episode of UnREAL finds Chet (Craig Bierko) and Quinn’s (Constance Zimmer) rivalry superseding everything, forcing Rachel to scramble and adjust – to keep everything running smoothly. Chet and Quinn are trying to shoot two different Everlasting…’s, while Rachel is truly attempting to sculpt a pseudo-revolutionary message for the series by pitting contestants Ruby the “blacktivist” (Denée Benton) and Beth Ann the Confederate-flag-bikini-wearing Southerner (Lindsay Musil) for some quick early-season ratings. Jay (Jeffrey Bowyer-Chapman) is looking for a way to help Ruby last, or at least get her to make some sort of a difference.

But can anyone, or anything, really reroute the unerring, well-oiled machine that is a tens-of-seasons-deep franchise like Everlasting…? The show-within-a-show scans, even more so than at other points in the series, like a metaphor for America, here. The shackles of tradition and habit hold every element of it in place; the impression of change is a passing illusion.

Ultimately, the network head Gary (Christopher Cousins) undermines both Chet and Quinn’s reigns over the set by bringing in a hot, young, up-and-coming white male director, Coleman (Michael Rady), to smooth everything over.

And so UnREAL Season 2 begins in earnest, with a ex-lover’s war of attrition that results in loss for everyone except — if her initial chemistry with Coleman is any real indication — possibly Rachel.

Here are the most shocking and revelatory lines from tonights UnREAL.

“Quinn taking the show back could be a real trigger for you.” -Dr. Wagerstein to Rachel

In-house psychologist Dr. Wagerstein (Amy) is UnREAL’s Maister Pycelle: a semi-buffoonish snake-in-the-grass who is just as hungry for power and control as anyone else on the Everlasting… crew, though she plays it holier-than-thou.

She’s on Quinn’s shit list this season for conspiring with Chet to get screen time — “ask the expert”-like segments — on the show. Here, she nosily horns in on Rachel’s private life, having seemingly been in touch with Rachel’s mother, and presses her to look after herself. At the beginning of the episode, we see Rachel throw the pills her mother sends her in the trash, refusing to accept her passive-aggressive gestures, and attempting to remain “okay” on her own terms. Quinn is marginalizing Rachel after losing Darius (B.J. Britt) to Chet before the big limo entrance in the Everlasting… pilot, and everyone seems to expecting another fit from Rachel, from Wags to Jay to Quinn herself.

“I agreed to one black guy, but four is just beyond.” -Quinn to Chet

In an attempt to turn Everlasting… into a TV-14-rated Girls Gone Wild, Chet invited Darius’s friends — including his manager Romeo (Gentry White) — to party with the girls (in bikinis) during the first scene of the series. Quinn is not only worried about sticking to the show’s formula, but also about the amount and brands of “blackness” being portrayed. After all, she had to fight network head Gary (Christopher Cousins) hard to allow a black suitor in the first place, and she doesn’t want to lose her position of power over Chet’s haphazard, misogynistic whims.

“Racism is so confusing, isn’t it?” -Rachel to Beth Ann

The final complication in Rachel’s quest to portray Beth Ann as a loud and proud, openly racist Southerner — horrified by the prospect of a black suitor — is the fact that Beth Ann is a huge football fan who loves Darius. One recalls Quinn “football black” vs. “black” argument from the season premiere; to some fraction of the world, a love of sports idols outweighs the day-to-day prejudices. This contradiction is the inspiration for Rachel’s comment, one of the episode’s funnier lines.

“You are the hottest girl here, so why am I completely flaccid? Come on, feel this.” -Chet to Tiffany, grabbing his crotch

This is Chet at his most despicable, trying to use Tiffany’s (Kim Matula) desire to separate herself from her father the football mogul to sabotage Quinn’s desire to make Tiffany the show’s “wifey.” Chet’s answer to get Tiffany sent home as expediently as possible? He encourages her to sleep with Darius’s friends, and be as wild as possible. His noxious introduction to her debate with Tiffany (a character posited as at least three times smarter than him) is another jarring piece of evidence of how warped by the anarcho-chauvinist hive mind Chet has become.

“I know you think you’re televising the revolution, but what we need right now is wet panties.” -Quinn to Rachel

Quinn’s comment to Rachel emphasizes that Rachel’s progressive agenda — incorporating a black suitor and Black Lives Matter activist into the cast of a notoriously white-washed show — is mostly a story she is telling to herself, for herself. As Jay warns Ruby earlier in the episode, Ruby may be able to speak her mind on one of the biggest primetime-channel shows in the country, but it will only be briefly, and under very specific conditions: “You’re the angry black bitch that will be gone in two episodes, maybe three.”

“It takes an iron spine and a steady hand to do this job. I don’t know… Maybe your mother was right.” -Quinn to Rachel

Quinn and Rachel may be theoretically on equal footing, but if the season premiere implied it, Epsiode 2 makes it painfully clear that job titles are not the reality of Everlasting… After Rachel’s fuck-up in securing Darius for the limo shot, Quinn has no problem punishing Rachel, and reminding her frequently of his missteps, as a way of maintaining control. She assures Rachel she can earn control back, but its a game during which Quinn will be constantly shifting the goalposts. It’s become a running rule on the show. When in doubt, chalk it up to Rachel’s manic depression. “You’re great until you’re not,” Quinn sneers.