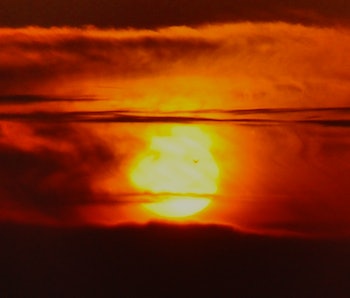 It’s hard to say, absent rigorous statistical analysis, whether 2016 has been as anomalously violent as it has felt, but here’s something we know for sure: The first six months of the year were the hottest on record since at least 1880 and by a very wide margin. We also know that people are more prone to violence in the heat and that horrifying attacks have splashed bloodily into our newsfeeds on a daily basis.

Proving causality is hard. Heat may catalyze violence more than it triggers it and that dynamic is nearly impossible to diagram or document. Still, that doesn’t mean there isn’t a connection between climate change and cultural upheaval. It’s no accident that the term “hot-blooded” is used as a synonym for “quick to anger.” In 2013, Berkeley economist Edward Miguel and colleagues published a paper in Science that looked at 60 papers correlating extreme weather with violence across disciplines, geographic locations, and historical timeframes. The findings were even stronger and more consistent than he could have imagined.

“It was striking for us to read about everything from Hindu Muslim riots in India, to land invasions in Brazil, to crime in Australia, to civil war in Africa, domestic violence in the U.S.,” he tells Inverse. “Nearly all of them showed this relationship where higher temperature was associated with more violence.”

Some places are hit harder than others. “It’s really a lot of the poorest countries, which also are starting out in some of the most tropical regions — the hottest regions — that are going to be hit the most,” says Miguel.

Here are five ways that a changing climate will fuel physical, cultural, and economic violence.

There are different possible explanations for the strong correlation between temperature and violence, but one is a simple matter of physiology: there’s evidence that humans are quicker tempered when it’s hot out. In one study that Miguel looked at, police officers were more likely to use weapons in a training simulation when the temperature in the room was turned up. Research in the U.S. shows that violence increases during a heat wave in both public spaces and private spaces (i.e. domestic violence), which undermines the theory that the increased violence is simply a matter of more people being outside, where they are more likely to come into contact with one another.

It’s true that climate change is warming northern latitudes more rapidly in absolute terms, but in terms of deviation from normal, it’s places near the equator that are hardest hit. The further away you are from the tropics, the wider your normal range of temperatures is, and the fewer days you will spend outside the range of normal in a warmer world. But closer to the equator, the normal range of temperatures is very narrow, an average increase of just a degree or two pushes you outside the range of normal nearly all the time. It’s these temperature shocks that fuel violence more than annual averages. Miguel’s research suggests that Africa, for example, could see conflict rise by 40 percent by 2050 — an astonishing increase in a part of the world that already sees more than its fair share of civil war and strife.

Part of the relationship between temperature and violence is direct, but another part is indirect. For example, if a country suffers years of drought and the crops fail, this leads to economic and social instability, which in turn increases chances of armed conflict. Historical climate records show a strong relationship between extreme weather events and the collapse of civilizations. Civil wars increase as the world warms with the El Nio Southern Oscillation cycle, and then fall as the planet cools off again.

In this case, it’s also true that parts of the world that start out hotter, poorer, and more violent will be disproportionately hit. These countries’ economies tend to be very heavily dependent on agricultural production, and they are therefore much more vulnerable to climate shocks. They also tend to lack the institutional support to insure farmers against crop failures.

When it gets hot out, economic productivity goes down; it’s just harder to get anything done in the sweltering heat. Wealthy countries are somewhat insulated from this because more of their workers spend their days in air-conditioned spaces, but the economy of every country on earth depends significantly on outdoor labor. This is important because economic strife can fuel social and political strife and lead to more violence.

A 2015 study by Miguel and colleagues found that the optimal average temperature for a country in terms of productivity is about 55 degrees Fahrenheit — go hotter or colder than this and there are losses to the economy. What this means is that northern countries, which tend to already have a high quality of living, may actually benefit economically from climate change due to gains in agriculture and worker productivity.

On the other hand, countries near the equator, which tend to be among the poorest, will be burned most badly. The hotter the starting temperature, the more each additional degree of warming will hurt productivity, Miguel’s research found. “It really looks like the trend towards warming in global climate is one that will tend to push the world toward greater economic inequality or time, and that is a real worry,” he says.

There are lots of things that countries can do to mitigate the effects of climate change, but the countries that will be hardest hit will also tend to be those lacking the resources to effectively deal with the problem. Poor countries are rightly feeling pretty peeved that rich countries got wealthy on the back of cheap fossil fuels, but they’re the ones disproportionately suffering the consequences. The COP21 Paris climate change agreement managed to eke out a commitment from developed countries to help pay for mitigation programs in the developing world, although details are scant on how exactly they will be held accountable to their promises. These sorts of international efforts are important, but it’s unclear if that will be enough to ease the burden of rising global inequality driven by climate change.

You might be thinking that this all sounds pretty bad, but only for those on the losing side of the coin. However, there’s lots of research to suggest that inequality affects the happiness of the winners, too. Most of us are bothered by an unjust system, even if it’s one we benefit from. In a world where information flows freely across most of the planet, everyone has an interest in fighting inequality. Climate change is throwing a significant wrench in the plans of developing countries to emerge from poverty, but it is not a hopeless problem. Indeed, it’s a problem worth taking very seriously.