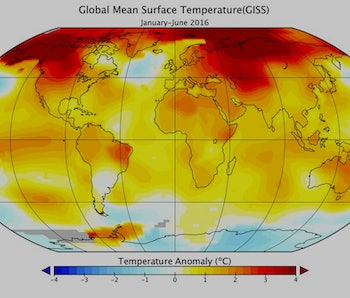 Usually, NASA updates the world on global climate trends after the end of each calendar year, but this year, in light of extraordinary events, scientists hopped on a teleconference to update members of the media and the public. “The average temperatures for the first half of this year are so in excess of any first part of the year that we’ve seen,” said Gavin Schmidt, director of NASA’s Goddard Institute for Space Studies, on Tuesday.

Climate scientists likely spent the first half of this year in a mixed state of fascination, bewilderment, and horror. Last year was the warmest year on record, both overall and for the January-June average. But the first half of 2016 “has blown that out of the water,” said Schmidt.

NASA scientists predict that 2016 will be the third year in a row to blast annual temperature records, an unprecedented event. The following year, 2017, will very likely be cooler, due to the El Niño event coming to a close. However, the overall trend is clear: rising global temperatures due to greenhouse gas emissions and other human impacts on the environment.

Nowhere is the world getting weirder than the Arctic. In some parts of the Far North, sea ice began melting two months ahead of schedule this year, said Walt Meier, a sea ice scientist with NASA. Of the first six months of 2016, five hold the record for minimum sea ice extent for that month. It’s too early to tell how the rest of the summer will shake out, but the start of the year has primed conditions for a minimum Arctic ice extent that breaks the 2012 record, he said.

Melting ice is a symptom of an Arctic climate that is warming twice as fast as the global average. On land, the effects of this dramatic shift are visible and obvious. Forest fires are on the rise, in size, number, and intensity, leaving visible scorch marks that can be observed from space. Parts of the tundra are getting wetter and greener in response to a longer growing season and shorter, less brutal winters. At lower latitudes, the effect is the reverse in many places, where multiple stresses have killed off swaths of the boreal forests, leaving them looking deader and browner in satellite images.

NASA is in Alaska this year taking detailed measurements of sea ice that it hopes will lead to better understandings of how it melts and responds to changing conditions. Like many aspects of climate change, sea ice melt has a feedback loop: as ice and snow melt, the darker surface of the ocean is exposed, which allows for more heat to be absorbed and held in the water.

The first half of 2016 came very close to touching temperatures 1.5 degrees Celsius over the pre-industrial average (1880-1899), which is the target goal set by the COP21 climate change conference in Paris late last year. “It’s fair to say that we are dancing with those lower targets,” said Schmidt. The first half of 2016 has been extraordinary, but it won’t be long before it represents the new normal. When that day comes, the Earth will be a very different place.