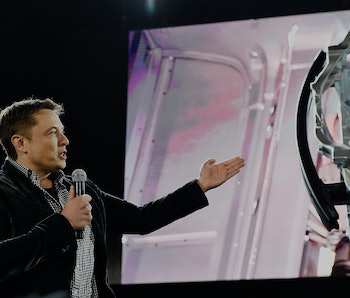 Elon Musk is supremely confident that his Tesla vehicles’ Autopilot feature makes driving safer, but he says autonomous vehicles still have a long way to go before they’ll be accepted across the world.

“We expect that worldwide regulatory approval will require something on the order of six billion miles,” Musk wrote in his Tesla Master Plan, Part Deux, which was released Wednesday night and provided a loose timetable for when consumers can expect fully driverless cars on the road.

He says the current fleet of Tesla vehicles drives about three million miles per day, cumulatively. All that data helps Tesla improve the systems, but it would still take the company five and a half years to reach the six billion mile mark at that rate. But with 400,000 pre-ordered Tesla Model 3s supposedly set to begin shipping to consumers next year, Musk could start adding a lot more miles to the daily total in the near future.

Six billion miles is an ambitious target, but Musk needs to set a high bar for the Autopilot technology after a Tesla owner in Florida died earlier this year, prompting a federal investigation. The Senate Committee on Commerce, Science, and Transportation have officially asked Musk to send a representative to explain what the company has learned since the fatality.

Musk has fervently defended Autopilot on Twitter and in the media. In Wednesday’s master plan, he reiterated his support for Tesla’s rollout of “partial autonomy” before a fully autonomous program has been tested.

“I should add a note here to explain why Tesla is deploying partial autonomy now, rather than waiting until some point in the future,” Musk wrote. “The most important reason is that, when used correctly, it is already significantly safer than a person driving by themselves and it would therefore be morally reprehensible to delay release simply for fear of bad press or some mercantile calculation of legal liability.”

Musk claims Tesla vehicles will soon be twice as safe as the standard vehicle on the road. The 2015 National Highway Traffic Safety Administration report claims there is one death for every 89 million miles driven, which is eight percent worse than the year before. Tesla is approaching 178 million miles with only one fatality connected to the Autopilot program.

The current “Autopilot” feature encourages drivers to maintain control of the steering wheel while driving. Musk says he won’t recommend anything less than constant vigilance behind the wheel until Autopilot’s “beta” classification is removed.

“It is called beta in order to decrease complacency and indicate that it will continue to improve,” Musk clarified in the Master Plan. “Once we get to the point where Autopilot is approximately 10 times safer than the US vehicle average, the beta label will be removed.”

By current standards, that would mean Teslas would have to meet a safety standard of only one death per every 890 million miles driven. If Musk can accomplish that, he imagines that owners will allow their cars to work like autonomous taxis, letting drivers “sleep, read or do anything else en route to [their] destination.”

More like this
Innovation
Jan. 25, 2023
Starship orbital flight: SpaceX successfully loaded the rocket with over 10 million pounds of propellant
By Mike Brown and Molly Glick
Innovation
Jan. 25, 2023
Watch: This jail-breaking wireless robot melts and reassembles on command
By Jennifer Walter
Gear
Jan. 26, 2023
How VinFast is gearing up to become America’s next big EV brand
By Jackson Chen
LEARN SOMETHING NEW EVERY DAY.
Related Tags
Share: