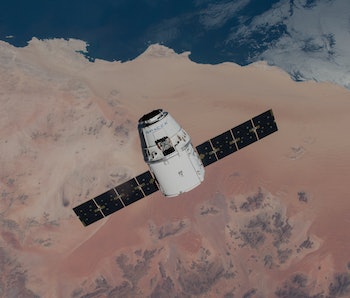 Very early Monday morning in Florida, SpaceX will launch its flagship Dragon spacecraft on a Falcon 9 rocket to the International Space Station and send 2,200 pounds of supplies in its ninth ISS resupply mission. The cargo includes crew supplies, tools, and objects needed for the 250 new and ongoing scientific investigations being carried out on the space station, and essential hardware that will improve the station’s functionality.

The scientific tools going up on this mission are particularly exciting this time around. At a press conference held Wednesday at the International Space Station R&D Conference 2016, NASA researchers and administrators discussed four major scientific and technological investigations that will begin after the Dragon capsule delivers the necessary supplies.

In line with increased biological research happening on the ISS, NASA will conduct the first-ever DNA sequencing experiment in space. Sarah Wallace, a microbiologist at Johnson Space Center, and her team are sending up a prototype DNA sequencer that she describes as half the size of a smartphone — “incredibly small,” she says. The device is actually capable of doing much more than parsing through DNA, and can sequence RNA and proteins as well.

The sequencer will run through DNA samples from three different specimens — a virus, a bacterium, and a mouse — and will hopefully provide proof-of-concept that DNA sequencing is possible in a microgravity environment.

That’s neat, but is it necessary? Well when you think about it, yeah. If we’re going to be conducting more science in space and potentially on other worlds, we’re going to want to run any organic molecules we collect through analytical methods.

The time to conduct such an experiment is ideal right now, given that Kate Rubins, a molecular biologist by trade, is currently up in the space station. “We are so fortunate to have Kate up there,” Wallace said at the press conference. “Her expertise has been invaluable to us. Of course, our goal is that any crew member will be able to operate this.”

Besides purely for pursuing science, a DNA sequencer could also have implications for disease control in space. “Right now, we have no way to diagnose infectious diseases on the ISS,” said Wallace. A genomics and proteomics sequencer could change that, should a crew member fall ill with a mysterious infection.

Two other projects are more directly related to investigating human health by taking advantage of the space station’s microgravity climate. Bruce Hammer at the University of Minnesota’s Center for Magnetic Resonance Research in Minneapolis is interested in finding out why astronauts experience bone loss in space and the mechanisms by which we might be able to prevent or mitigate this. Hammer and his team are testing the accuracy of a new device that can simulate microgravity environments for cell and tissue cultures through a manipulation of magnetic fields. The goal is to emulate a microgravity environment here on Earth to observe the effect on bone cells, and comparing the effects to cell cultures being sent to space on this mission. It’s not just a way to study bone loss in astronauts, but it’s also just verification that a microgravity simulator works — which is just plain awesome.

How the Heart Changes in Space

The second biology project is about observing the effects of microgravity on the heart. We know the human heart undergoes structural changes in space — it gets smaller, and reverts to a spherical shape. A particular mystery is how microgravity affects the cells involved in beating. Using a new technique that turns blood cells into stem cells and then back into beating heart cells (“you can see them visually contract with the naked eye,” said Stanford University researcher Arun Sharma, who’s involved with this investigation), researchers are sending heart cells and studying how their shape and behavior change under microgravity. This is another instance where having Rubins on the space station has proved to be a happy coincidence.

The last two major projects are technical in nature, but no less important to helping us advance the future of space travel and exploration. The first, more modest project is the installation of a new international docking adapter to the ISS which conform to the new International Docking Standard adopted by all ISS partners.

The standard “is going to be used throughout cis-lunar space,” said ISS program manager Kirk Shireman. There are already plans for Orion and other payloads on upcoming Space Launch System to have this docking system. SpaceX is already updating its Dragon spacecraft to adopt IDS as well, as is Boeing for its CST-100 Strainer vehicle. Overall, the adoption of IDS will help to streamline space for both international agencies and private companies around the world and hopefully push space exploration and travel into a less rigid, more open climate.

The first IDA was supposed to go up to the ISS last year, but was destroyed in SpaceX’s June 2015 mission failure. This puts NASA’s commercial flight plans in a predicament, and Shireman and his team are trying to play catch-up. He hopes to see the second IDA finally go up on SpaceX’s 16th ISS cargo mission, which is still unscheduled.

Lastly, NASA is testing out a new phase-change material heat exchanger device. That’s a mouthful, but here’s the skinny: spacecraft typically use radiators as a way to reject excess heat produced by the sun as well as to absorb excess heat during colder scenarios. Unfortunately, this consumes finite resources. NASA is testing out a new technology that can maintain temperatures for a spacecraft without consuming materials. The self-contained device can essentially freeze during cold portions of an orbit in order to reject thermal energy, and melt during hot phases in order to absorb excess heat. In sending the device up to the ISS, NASA hopes to verify it can work in microgravity environments.

The SpaceX mission to the ISS starts at 12:45 a.m. Eastern time on Monday with the launch of the Falcon 9 rocket from Cape Canaveral Air Force Station in Florida. You can watch the launch live at spacex.com/webcast.

More like this
Science
6.25.2022 4:00 PM
Voyager: 12 spectacular images from NASA's longest-lasting mission
By Jennifer Walter
Science
6.27.2022 8:45 PM
NASA found the crash site of the rocket booster that hit the Moon in March
By Kiona Smith
Innovation
3 hours ago
Are self-driving cars safe? The tipping point rests on a psychological illusion
By Jean-François Bonnefon and The Reader
Share: