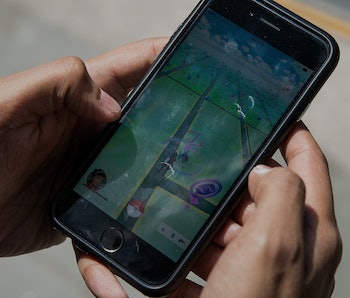 The heart of Manhattan has become the heart of Pokémon GO, Nintendo and Niantic’s augmented reality app that is the world’s current obsession. Using GPS and location data in smartphones, Pokmon GO lets players find and catch virtual monsters to challenge rival trainers at “Gyms,” or local attractions around the world. It’s the revitalization of a once-dominant multimedia franchise that, for many nostalgic millennials, never strayed far from their hearts.

New York’s Central Park has become a choice destination for would-be Pokémon masters. The lush scenery, long trails, and abundance of Pokéstops (areas where players can replenish items) have turned the park into a central meeting place, where the social aspects of the game are turned up to 11 and members of Valor, Instinct, and Mystic — the three teams players pick from — vie for territory.

The game is still in its infancy, however, and so despite their early devotion, fans have a lot of requests for updates to the app.

One of the most pressing issues plaguing the app are the technical instabilities that render it unusable after a period of time. It forces players to restart, which isn’t a nice thing to do when batteries are running low or when players have just caught an elusive Scyther.

“My phone has frozen like four times since I got here,” Betina, a Victoria’s Secret employee and Valor member spending her off time in Central Park, told Inverse on Tuesday. She and her companion, Winkler, a staff associate at a nearby university, both said that their number one request from the app was fewer glitches.

Others echoed their frustrations. “Because its so new, I guess the creators weren’t prepared for how popular the game would be, but the app crashes a lot,” Abe, another Valor and a student at Brooklyn Tech, told Inverse. “I’m just hoping for more bug fixes, and future upcoming battles and trading.”

One of the most memorable features of the original Pokémon games was the then-revolutionary concept of trading Pokémon between connected Game Boys. Though it’s now infinitely easier to connect with other people’s devices, this feature is somehow absent from GO. And it’s sorely needed.

“There’s a lot of items you don’t need [that] someone else might,” Tim, a Mystic member who works as a sushi chef at the United Nations, told Inverse. His obsession with the game made him walk over twenty blocks from work to the park. “Some Pokémon you might not get in your area where you live, so it’d be nice to have trading..”

Other clusters of players I spoke to asked for the ability to fight one-on-one with friends and other people they encounter.

A quartet of high school students and Mystic members who ventured from Gantry Park, in Astoria, were blunt about dismissing the game’s current, Gym-only battle system. “We want actual Pokémon battles, for sure.”

“It’d be even nicer if it was like the old days.”

It’s curious why Niantic — whose Pokémon GO is built upon its last augmented reality game Ingress — didn’t include the franchise’s most recognized hallmarks. Demand for them is clear, even outside Central Park. Peruse Reddit, which has about an equal stretch of diversity as Central Park, and you’ll read about players in rural areas who are unable to keep up with urban-dwelling gamers.

But even city folk are asking for more out of their newest obsession. Jasper, whose busy life in the Bay Area and committed relationship keeps him from staying on equal footing, expressed a desire for a balance that would let casual players compete without penalty. “I see the CP [“Combat Power”] on all the Pokémon at Gyms going up, so I’m wondering for someone who’s a casual player, how am I able to capture Gyms when it seems like I’m always behind the top players catching those Gyms?” he asked.

Other than one-on-one battles, in the old Game Boy games players were able to fight Poékmon they encountered in the wild, which allowed them to catch new species while leveling up the Pokémon they already had on their team. Porting this over to GO could solve some of Jasper’s concerns as a non-rabid user.

“I don’t want to evolve [my Pokémon] by catching repetitive Pokémon,” lamented Yanni, a designer and member of Mystic. “It’d be even nicer if it was like the old days, you could battle others and then evolve your Pokémon.”

Her friend Sanjita, a hedge fund employee who joined Instinct, also found Pokémon GO oddly straight-forward. “I don’t like that you can just catch them. I’d prefer it if you could fight and then catch them.”

Jasper, from San Francisco, is more concerned with hatching Pokémon than catching them. “Being able to run in the background so I can incubate eggs while you don’t have it open — even if the data is running — that’d be nice just for the screen time,” he said.

Even with these issues, there’s little chance that the obsession with Pokémon GO will subside anytime soon. Aside from severe privacy gaffes or simply boring the hell out of everyone, there’s a sense of faith from these park wanderers that Pokémon GO will become part of their lifestyle — if it isn’t already.

“It’s all I’ve done since it came out,” said Abe, whose tone was both exhausted and passionate. “This game is killing my battery life, but I have to keep it on to incubate my eggs!”