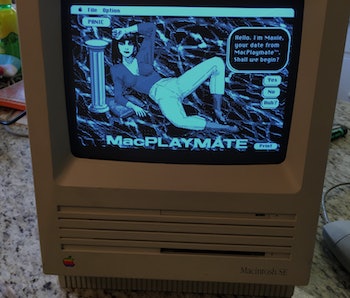 The man who discovered Mac Playmate, a pornographic game from the ‘80s, on an old Mac SE never expected his find to become a viral sensation.

“I’d cracked up when I discovered Mac Playmate hidden in the fake America Online folder,” said Huxley Dunsany, also known as Reddit user wowbobwow. “And when I showed a few pals via Facebook message and saw their incredulous reactions, I thought I might get a few laughs and ‘WTF?!’ type comments if I submitted to Reddit, but I was completely amazed by how quickly it blew up.”

“I’ve been collecting ‘retro computers’ and video game stuff since I was a kid, at first due to financial necessity (we were very poor and frequently homeless, so outdated / obsolete machines were all I could get) and now as a fun hobby to share with my young son,” he says, adding that he likes to share his finds online.

Internet fame can end badly, though. The teen behind the viral “Damn, Daniel” video had his Twitter account hacked, for example, and other figures have also been targeted because they became popular on a particular slice of the internet.

Dunsany says he’s had a better experience, with most people being decent.

Unfortunately, Imgur and Reddit haven’t pulled a Facebook and promised to split revenues with viral content creators, so Dunsany won’t see any cash out of his wave of viral fame. Still, the recognition for a quirky find is good enough, and he says watching the Imgur view counter rise (it’s at over 573,000 right now) was exciting. Dunsany says he hopes someone will buy the refurbished Mac SE, vintage smut and all.

In the meantime, he’s just enjoying the moment.

“If I have any advice at all to share, it would just be to have a good sense of humor and to avoid taking any weird or offensive comments personally,” Dunsany says. “Internet fame is probably the most fleeting of all fames, so enjoy it while it lasts!”

More like this
Innovation
Sep. 17, 2022
The 7 best magnetic charging cables
By Lauren Moison
Innovation
3 hours ago
Audio deepfakes are a major threat — here’s how researchers expose them
By Logan Blue, Patrick Traynor and The Conversation
Innovation
Sep. 22, 2022
Trash can-sized robots could revolutionize how you travel — but there's a catch
By Molly Glick
Related Tags
Share: