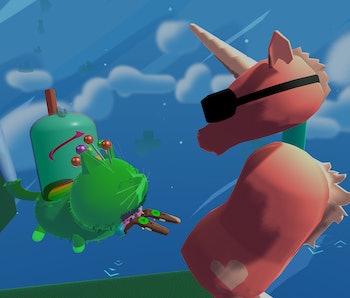 Autonomous sensory meridian response, or ASMR, is described popularly as a “brain orgasm.” It’s generally recognized as the euphoric sensation that feels like a tingle in your brain, and it feels super weird and awesome. I would know: Over the past couple of months, I’ve become obsessed with the audio phenomena and the YouTube community based around creating videos that trigger ASMR in viewers.

ASMR videos on YouTube combine ambiance with a little theatricality, as well as some technical sophistication. There are recording devices out there that imitate the directional component of sound, sometimes having been recorded to only reach a single ear at a time. Turns out, video game developer Gordon McGladdery also found something unique in ASMR, and he incorporated the phenomena into a virtual reality project called Fantastic Contraption. The VR game allows players to solve environmental puzzles in a virtual space that is reminiscent of either a PBS educational show or an acid trip.

Could you share a little bit about your sound and music background?

I sucked at classical learning; I could never efficiently read sheet music and always had to look at my hands. That said, I’ve been playing guitar and anything else I’ve been able to get my hands on since I was six. I started toying with sound engineering while playing in bands in university, recorded my first solo album —poorly — while living in South Korea post-university, then won a full scholarship to Vancouver Film School where I finally learned how to do sound design and engineering properly. I now run A Shell in the Pit Audio in Vancouver, working on games such as Rogue Legacy, Parkitect, Night in the Woods, Duelyst, Viking Squad, Bunker Punks, Okhlos, and Wandersong. Our VR titles are Fantastic Contraption and Universe Sandbox², and we also do all music and sound for the YouTube channel Smarter Every Day.

How did you start working with VR games?

As soon as I found out what binaural audio was while in school, I flipped out. This naturally led to VR. Our first VR gigs were actually commercial projects for Hammerhead Interactive based out of the United Kingdom. We did pieces for Thunderhead, Boursin Cheese, and Whirlpool. Sexy stuff; actually was a lot of fun. Then due to my experience — since like, no one else had any — my pals at Power Up Audio referred me to Northway and Radial Games when they were starting Fantastic Contraption.

What is different about composing music for VR?

In my opinion, pre-composed music often does not belong in the VR space whatsoever. It depends entirely on the level of abstraction your world exists in. In an abstract concept like Audioshield, where you are literally inside a song, you can get away with standard non-diegetic music — meaning pumping a straight stereo track into someone’s ears without spatialization. But, if your virtual world has physicality, substance, and weight, all music must be diegetic — meaning it is emanating from the world and the characters are aware of its source. Non-diegetic score in an immersive space breaks immersion. I nixed the score completely from Fantastic Contraption and put it in the world so that the player scores the game as they build, because we’ve made almost all objects in the game emit musical tones when you interact with them.

You said that ASMR inspired bits of your audio for the VR game Fantastic Contraption. Could you elaborate on that?

The concept of ASMR and Fantastic Contraption’s concept really complement one another, and I thought that could be valuable not from the perspective of the player but of Livestream and YouTube audiences. A viewer can simply be watching someone do detailed work in a calm, safe environment. When approaching the sound design, I wanted to keep it within the sound choices ASMR folks often use. The main ambience is very static, somewhat imitating preamp noise or room tone, which is a bit against the grain from a traditional sound design perspective since it is more boring than usual. The interactive sounds I wanted to be very tactile and a little sticky, and the musical tones are soft and non-intrusive and their randomness while someone is building makes it so you’re never falling into a groove.

Do you think ASMR has crossovers with VR?

Sure! There could definitely be ASMR-specific apps made for VR, especially since binaural audio is a staple of both mediums. A lot of these — admittedly creepy but effective — ASMR videos are specifically first-person experiences. However, I think there’s a hell of a big uncanny valley gap to be crossed unless the “ASMRtist” can be heavily abstracted so it’s not a creepy, limited-polygon freak spraying virtual water on your forehead.

What is it about VR that lends itself uniquely to sound and music? And ASMR?

VR lends itself wonderfully to sound design and pushes music into more interesting and creative places. Since the music in a less-abstracted game needs to emanate from within the world as to not disturb immersion, I’m really interested in seeing where my colleagues will take that. For sound design, the level of detail has shot through the roof. We no longer have control over what our users are going to focus closely on, whereas in traditional games and film you have much more cinematic control over what you deem as the most important thing in the room. Developers have realized that everything needs to be interactive in a satisfying VR environment, therefore all those interactive things need sounds that are reactive to not being interacted with but how they are being interacted with: How hard is an object being thrown? What is it being thrown at? The simple act of dropping a wheel in Fantastic Contraption required hundreds of individual sound files to be selected from based on various input data.

From an ASMR perspective, VR and specifically Fantastic Contraption lends itself to an acceptance and interest in minutiae. It’s my opinion that one of the core tenets of ASMR is a focus on unimportance or lack of consequence. VR is great for this.

Do you plan on experimenting with VR music further in the future? What else do you want to incorporate into your music experimentally?

I approach each project individually, so it’s really hard to say what is going to come up in the future. For VR, the challenge will always be: What is the most interesting way I can pull the music into the world? From a sound perspective, I’m really interested in the geometry-based occlusion and reflections being developed by [VR audio company] Two Big Ears. I am also excited to finally have an extremely skilled employee, Em Halberstadt, who has probably already prevented a couple nervous breakdowns in the few months she’s been working with me. For overall composition, I really just want to work on a really chill soundtrack. I’ve been working on a bunch of really high energy soundtracks for the past three years and I’m starting to get a little rocked-out; Parkitect is great for this.