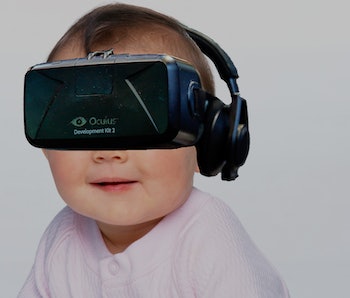 Sitting amid a pile of broken eggs, the four-year-old doesn’t flinch when a Tyrannosaur lumbers into view. “Is he going to eat me?” She giggles, holding the Oculus Rift to her face with hands barely able to grip the goggles. “You go away, I say!”

As far as virtual reality reactions captured on YouTube go, it’s pretty freaking cute. It is also a complete violation of Oculus’ age limits. To read VR disclaimers is to be bombarded with a list of potential adverse effects, symptoms, and warnings, including hard stops for kids. Children under the age of 13 should not use the Rift or the Gear VR, say Oculus and Samsung. The Playstation VR, likewise, is suitable only for people 12 or older Sony recently announced.

What gives? The Rift-wearing toddler who laughs off a VR T. rex didn’t appear to be in any immediate danger. After all, kids watch TV, play video games, and use computers long before they turn 13. Children as young as two are capable of using iPads. Is virtual reality really that different from the visual media that have come before?

“I don’t see a need for any age restrictions,” David Schwebel, a psychologist at the University of Alabama at Birmingham, tells Inverse. Children of all ages “enjoy fantasy — fantasy movies and fantasy books,” without negative psychological effects. That said, Schwebel has two important caveats: First, content should be age-appropriate in the same way movies and games come with ratings and, second, the long-term physiological impacts of VR expose remains a known unknown.

VR makers, at least in the fine print, want us to tread lightly through virtual territory. “The Gear VR should not be used by children under the age of 13. Adults should monitor children (age 13 and older),” goes Samsung’s disclaimer for its new device. “Prolonged use should be avoided, as this could negatively impact hand-eye coordination, balance, and multi-tasking ability. Adults should monitor children closely during and after use of the Gear VR for any decrease in these abilities.” Periodic breaks, a staple of video game console recommendations, also get a shout out.

The history of virtual reality is not devoid of adverse effects, including eye strain and nausea — though motion sickness, to hear VR developers say it, has been largely eliminated.

Long-term questions, however, remain. In 2014, University of California, Los Angeles neuroscientist Mayank Mehta showed that spatial mapping neurons in rats act differently in VR. “We discovered that there were big changes in neural responses in virtual reality: such as altered neural rhythms and a shutdown of nearly 60 percent of neurons,” Mehta tells Inverse. “It is important to keep in mind that these are unusually large changes in a part of the brain that is known to be very plastic even in adults and especially in children.”

But why the industry has set the specific age limit at 12 or 13 (or what the difference a year makes!) isn’t really grounded in child physiology or neuroscience. At the 2015 Re/Code Conference, Oculus CEO Brendan Iribe broached the 13-year-old cutoff and said it reflects the age policy in place by Facebook (which owns Oculus). But — in line with Facebook’s Mark Zuckerberg and Oculus’ Palmer Luckey extolling the classroom virtues of VR — Iribe did make vague references to lowering the age limit.

“Eventually, one day, we definitely want to have Oculus for kids,” Iribe said at the conference. Neither Samsung nor Oculus responded to requests for clarity on their age policies. A Sony rep confirmed with Inverse that “the age limit for PS VR is 12 years and up. Nothing to share beyond that.”

From the point of developmental psychology, Schwebel believes that children younger than 12 should have no trouble with VR. The psychologist has trained “hundreds and hundreds” of kids, ages 7 and 8, in virtual reality road-crossing simulations to avoid getting hit while crossing artificial streets. Such studies underscore that VR isn’t just for entertainment, Schwebel says. “It has tremendous potential as an educational tool, teaching children to be safer and healthier.” The bulk of his work uses screens in simulated rooms, rather than headsets — but a pilot study, reviewed and funded by the National Institutes of Health, will enable his colleagues to train children in China using Google Cardboard headsets this summer.

In a similar traffic-avoiding study, published in 2015 in the British Medical Journal, a group of Canadian psychologists concluded that, “VR technology is a valuable tool for assessing child pedestrian behavior.” Barbara Morrongiello, an author of the BMJ paper and a child development expert, wrote to Inverse in an email: “We are now using the Oculus Rift and it works well with children as young as 7 years, and we could likely fit it to most 6-year-olds too. However, I am not sure that younger children (< 6 years) could tolerate it given the weight and sizing.”

But Sony and Oculus might want to pay attention to the 4-year-old giggling in the face of a virtual T. rex. If she’s fine, as Schwebel’s hundreds of subjects have been, perhaps reviewing the age limits should come sooner than later.

More like this
Gear
Feb. 1, 2023
Samsung Can’t Resist the Call of the Metaverse
By James Pero
Gear
Jan. 23, 2023
Why Microsoft thinks ChatGPT (and not the metaverse) is its future
By Ian Carlos Campbell
Culture
12 hours ago
Peter Jackson’s Most Unnecessary Movie Fixed the Biggest Problem with The Hobbit
By Ryan Britt
LEARN SOMETHING NEW EVERY DAY.
Share: