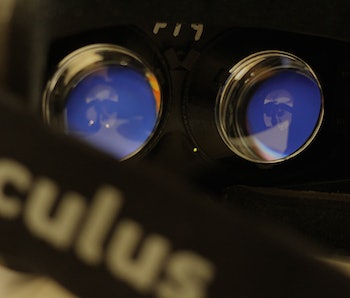 Virtual reality is a technology that offers a lot and asks for little from us — just our eyeballs really. But that may be more than we want to give if technologies don’t change substantively. A few minutes behind an Oculus headset isn’t going to hurt anyone, but will the inevitable binge sessions hurt users?

There’s accumulating evidence that long periods in front of screens only a short distance away can be harmful. Rift users already complain about “hangover time,” headaches, and nausea after using DK2 for three-hour sessions. The problem here seems to be that VR works against, rather than with, the human visual system’s natural reflexes.

When we view things coming at us IRL, our eyeballs need to do two things to process what we see. Convergence is the way your eyes track an object as it moves toward you. Accommodation is how they adjust the amount of light coming in, preventing the image from blurring. Normally, these processes happen at the same time, hence the not-so-often-used term “vergence-accommodation coupling.”

Unfortunately, the images on a VR headset force those processes to work out of sync. Whereas your eyes normally converge and accommodate to the same distance, a Samsung Gear will force them to converge to a further distance while accommodating light coming off the display. Sure, our eyes can work against their instincts to make sense of it, but — after a while — it just gets tiring. Headaches, nausea, and fatigue ensue. That’s over the short term. We don’t really know what “vergence-accommodation conflict” will do over the long term. It’s possible effects will be minimal; after all, most of us don’t have visual freakouts IRL after spending 8 hours a day staring at a screen. Or maybe we’ll have serious problems. It’s hard to know because we don’t have any data.

The problem with current, 2D VR is that our eyes only take in a single flat image, with only one point of focus. This isn’t the case in the real world, where our eyes take in many different perspectives of the same image and combine them together to form a scene with more depth, allowing our eyes to shift focus freely. Wetzstein’s solution is to recreate the natural visible light field in the VR headset, mimicking the real-world experience of having many perspectives of the same image come at your eyes. The end result is a sort of hologram, generated through changes in both the software and headset, that’s less taxing on the muscles and pathways responsible for “accommodation.”

In the meantime, queasy virtual reality pioneers are coming up with their own ways to deal with “Rift Nausea,” turning to traditional antidotes for motion sickness, like ginger-based foods, Dramamine, and, of course, smoking weed. Some even swear by anti-nausea bracelets. Still, as with all things that make you sick, the best advice for avoiding VR sickness is this: Just take the damn thing off. If something hurts, stop using it. Makes sense right?

More like this
Science
6.28.2022 4:52 PM
1.8 billion people face once-in-a-century flooding, study reveals
By Tara Yarlagadda
Science
6.20.2022 12:00 AM
Hubble telescope figures out the trick to weighing a lonely black hole
By Nancy Atkinson and Universe Today
Culture
7.1.2022 9:00 PM
Male celibacy has evolutionary benefits — but not for the reasons you think
By Ruth Mace, Alberto Micheletti and The Conversation
Related Tags
Share: