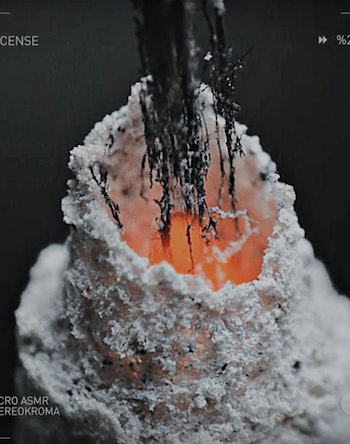 Incense (a.k.a. that stuff we used too much of in college) looks pretty innocuous at first glance. Really, it’s like a super skinny, aromatic cattail that makes cool smoke trails. But take a closer look, and you’ll see that incense is pretty badass.

The folks at Stereokroma, a Montreal-based video production company, are launching a new macro video series with a closeup of what it looks like once you flick your Bic and start filling the room with amber-scented aromas.

The video bounces around from 100 percent realtime to burning at 200 and 300 percent, so viewers can see the lit incense progress at different rates. Watch as the silver-gray ash slowly advances down the stick, preceded by a small ring of dark, actively burning material that encroaches on the untouched, beige-hued incense fibers. You can also see the DayGlo orange of the burning embers peeking through a shroud of white, lacy ash on the outside of the incense. Pretty cool, huh? Well, that’s just the visual part of this clip.

According to Stereokroma, the video is also meant to trigger an Autonomous Sensory Meridian Response. ASMR (sometimes called a “brain orgasm”) is basically feeling a pleasant, tingling sensation on the back of your head, scalp, neck, or other body parts, after being exposed to certain aural stimuli — in this case the white noise and trickle-like sound of the incense turning to ash. There’s not a whole lot of science behind ASMR and it doesn’t work on everybody, but heck if the rainstick-esque noises in this video aren’t pretty soothing anyway.

Next time you light up a stick (or a cone) of that sweet-smelling stuff, just remember that this is what’s happening at its core.