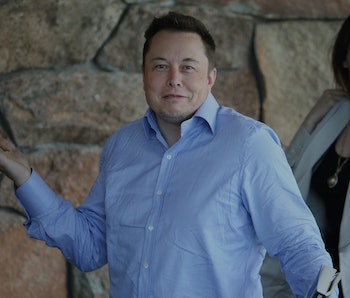 Tesla’s Autopilot is the most advanced autonomous vehicle technology available in a commercial car, but all it took was a single fatal crash to put it under a constant veil of scrutiny. The technology is technically in “beta,” according to CEO and founder Elon Musk, but the definition of that term is subject to interpretation (by Musk, that is).

In May, Joshua Brown, 40, died when his Autopiloted car hit a tractor-trailer. Tesla made the crash public on June 30, beginning a media frenzy of Tesla-takes, which Musk has made it his personal responsibility to respond to as the impromptu spokesman and public Twitter defender of Autopilot technology.

Most recently, Musk defended the “beta” classification of Autopilot, in the typical roundabout, tweet-off-the-cuff way he usually responds to criticism.

“Beta” for Tesla means “any system with less than one billion miles of real world driver,” Musk tweeted on July 10. He continued that Tesla uses “beta” “explicitly so that drivers don’t get comfortable. It is not beta software in the standard sense.”

In other words, Tesla isn’t ruled by the standard definition of beta. It exists in a world where beta is simply a cautionary word for technology that is not quite finished, not close to the stated number of miles it needs to be finished, but is still safe if used in the correct ways.

Musk’s beta definition arose after he retweeted an article posted on Fortune. Musk and Fortune have had a tense relationship since July 4, when the magazine published an article asserting that Tesla should have told its investors about the crash. Tesla is now under investigation by the SEC regarding the same claim.

It makes sense that Musk was on full alert regarding Fortune articles about Tesla — only this wasn’t a Fortune article, it was republished from Reuters.

Regardless of how it all started, the Twitter beef provides some insight into the timeline for autonomous cars (although a timeline for Musk does not necessarily mean a hard deadline). Tesla will reach 1 billion miles and be done with beta in “probably six months,” and it will continue to be called beta because the entire “point of calling it ‘beta’ was to emphasize to those who chose to use it that it wasn’t perfect.”

This is the first hard answer Musk has given to the question of how much autonomous driving data is enough. Each company working on autonomous cars has its own answer, but Tesla is the only one using car-buying customers to gather its data. So far, their method has worked: Tesla has gathered more data, faster than any other company in the race to a billion driverless miles.

Musk isn’t the only one who believes that it will take a 10-digit number before autonomous cars are complete. An April report from the Rand Institute reached a similar number, and senior Rand researcher Susan Paddock told Inverse that it all depends on how much risk companies and drivers are willing to take.

Here’s the math behind a billion from the Rand report:

“Although the total number of crashes, injuries and fatalities from human drivers is high, the rate of these failures is low in comparison with the number of miles that people drive. Americans drive nearly 3 trillion miles every year, according to the Bureau of Transportation Statistics. In 2013, there were 2.3 million injuries reported, which is a failure rate of 77 injuries per 100 million miles driven. The related 32,719 fatalities correspond to a failure rate of about 1 fatality per 100 million miles driven.”

Despite the set billion-mile-mark, Musk clarified a few tweets later that he isn’t going to let Tesla be ruled by Autopilot’s odometer.

In other words, Autopilot’s “beta” classification is probably here to stay.