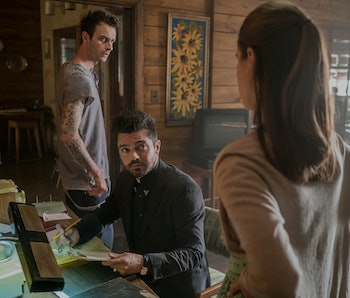 So far, AMC’s Preacher has been obnoxiously vague about its mythology — especially since you can find it in the comic books on which the series is based. The show didn’t introduce Jesse Custer (Dominic Cooper) to heaven’s angels until last week, the sixth episode, whereas the comics went right into the Saint of Killers and Genesis within the first two issues.

Comic books are an opaque medium that explore bizarre concepts without mercy, but Preacher is a rare exception of the TV series being more wildly confusing than its print source material. In the seventh episode, “He Gone,” Preacher eases up on the weird enough to make Cassidy (Joseph Gilgun) coming out as a blood-sucking vamp a stand-out moment the show will be remembered for.

After sending Arseface to hell, Jesse speeds through the Kübler-Ross model by taking out his guilt on everyone, including Tulip (Ruth Negga) and Emily (Lucy Griffiths). Cassidy, the thorn in Jesse side and someone always eager to help, is pushed away by Jesse’s petulant attitude. Arseface wasn’t a good kid, Jesse reasons; he was why Tracy Loach is bed-ridden with half her head blown off. Tracy was Arseface’s crush and she didn’t like him, so Arseface fired a gun to her head, and then to his.

Whether Jesse actually feels good about the deed is actually pretty dubious, but somewhat besides the point; sinful man like him is arrogant enough to believe he is entitled to cast as many stones as he pleases. We don’t know pre-shotgun Arseface, and Preacher does as little effort as possible to expose us to that side of the kid. And really, it doesn’t matter, maybe no one teenager deserves damnation to hell. Especially Arseface, who was trying his hardest to turn his life around.

There is some comeuppance: Cassidy exposes himself as a vampire, burning up in the hot Texas sun to remind Cassidy just how fucked his world has become.

Cassidy’s “coming out” is possibly bluntest Preacher has been thus far in its religious satire. For a show that is confusingly both a genre comedy and a sincere gothic drama, Preacher hasn’t made a whole lot of use of its premise to lampoon the hypocrisies of the Catholic church, or any religious establishment (Jesse is a Baptist minister) except for blowing up Tom Cruise off screen. But Cassidy confessing a secret identity only to burn up by holy fire — all to prove a point — feels like Preacher is finally getting somewhere with its messages, however bogged down in artistic ambiguity they may be.

It quite sucks Jesse doesn’t have any friends right now, because Odin Quincannon (Jackie Earle Haley) has turned on his promise and is coming to crush the church with legal deeds to Jesse’s’ land. No, Preacher doesn’t explain how Genesis didn’t work on Odin Quincannon, but that doesn’t matter at the moment. Have faith that Preacher will get to it soon.