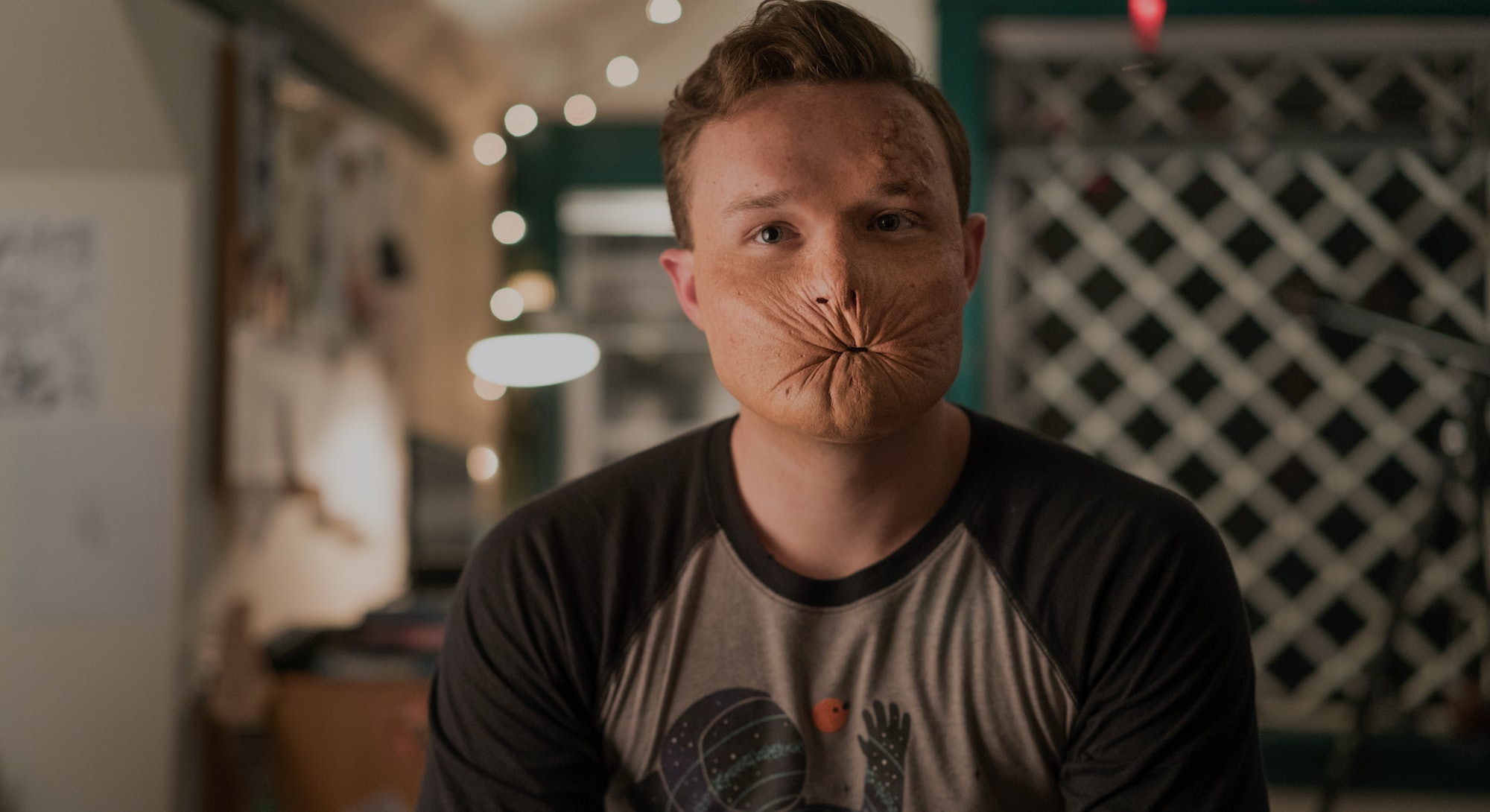 Other than the 20-year-old source material and some vague language in the casting call, Ian Colletti didn’t have much guidance when he turned on the camera to make his audition tape for Preacher. Somehow, he had to convince Seth Rogen, Evan Goldberg and Sam Catlin (a producer on Breaking Bad) that he could play a kid named Arseface, which is as ridiculous as it sounds.

“The notes were that he shot part of his face off and he drools on himself,” Colletti recalled, sitting in a suite at the London Hotel in New York City. “That was the formative stages of me coming up with the voice that is the staple of this character. So it’s this ridiculous tape is of me doing a beginning version of this voice and spitting all over myself and doing these ridiculous faces.”

Colletti was pretty uncertain of the daffiness he had just committed to film, and told his agents they should feel free to bury the thing and move on, maybe find him a different opportunity. But when the opportunity to play a fan-favorite character on a highly anticipated, destined-to-be-cult-classic TV series on AMC, working with the dudes who made This Is The End and Superbad and nearly started a nuclear war with North Korea, you’ve just gotta go for it.

It’s a good thing his reps sent in the tape, because soon after, Colletti was meeting with Rogen, Goldberg, and Catlin. Almost immediately, he began getting fitted for the strangest, most disgusting-but-impossible-to-stop-staring-at prosthetic makeup device in a long time.

In Garth Ennis’s beloved comic series, about a violent, justice-minded preacher hell-bent on beating some righteousness into the seriously immoral monsters of the modern world, Arseface begins as a teenage slacker named Eugene. The profane nickname comes from a major firearm fuck up: Eugene tries to blow his head off after his hero, Kurt Cobain, did the same, but instead just severely disfigures himself, creating a big ‘ol gap in his face that makes him look like he has a butthole where his mouth should be.

It was a role that Rogen, who produces and directs the series, actually wanted to audition for, back when Skyfall director Sam Mendes was attached to a movie adaptation of the comic. The version he had in mind back then is probably, technically-speaking, significantly different than the one they had to create for Colletti.

Luckily, Preacher’s position at AMC gave them access to KNB Effects, the studio that does the prosthetics for the zombies on The Walking Dead. On the down side, it still meant a lot of trial and error, and a significant learning curve for the young actor, whose biggest role to this point was a regular part on the ill-fated Greg Kinnear Fox sitcom, Rake.

“It’s a foam prosthetic that pretty much stretches all the way across the left side to the right side of my face, from the top of my face down,” Colletti says, explaining how his arse face works. “It’s about as comfortable as it looks. It takes about two and a half hours to get into, and that was when we had it down pat, doing it every day and got into a routine.”

In the show, Arseface is forced to drink his meals, and as Rogen alluded to, Colletti has to do the same exact thing on set.

“The hardest part is not being able to eat in it,” he laments. “So, if you’re really pulling a long day that’s 20 hours, I literally am drinking shakes all day because I can’t eat. It’s the saddest example of forced-method acting that I can come up with.”

But slugging down creamy concoctions filled with chunks of fruit and syrup (to simulate the raw meat and blood shakes Eugene drinks, natch) doesn’t pose nearly as much of a challenge as the physical restrictions caused by the mask.

“It kind of works against me. I try to maintain the quality of the voice and the mask does more to muffle it than make it sound like his speech is impeded by disability,” Colletti said, noting that he actually had to go back and re-record, during post-production, all of his lines for the first episode.

“The difference between the pilot and the second episode, we were able to open up the mouth/butthole a little bit, to make it a little bit easier for me to do the voice, rather than have the sound be more muffled,” he says. And at the same time, he’s been able to work on using the parts of his face that people can see, to create a more convincing version of a troubled character who is desperate to connect and repent in a small Texas town that encourages neither.

“As an actor, your face is one of the primary things you use to express emotion, and not being able to use the lower half of your face, it’s tough,” Colletti says. “It’s been kind of a fun challenge to try to communicate more than I usually would with my eyes. And I’m learning how to flex the mask. Whenever I have it on in front of the mirror, I have to work on it. Sometimes I have to do more extreme expressions to get subtlety to get read through the inch of foam, and learning how to flex that and getting specific faces.”

Arseface, despite the name and gimmicky origin story, is not just a stunt character used as the butt of a joke (though plenty of such brilliant puns come his way). He’s actually an integral part of the show’s story, as he relies on the wayward preacher Jesse Custer (played by series lead Dominic Cooper) to help him communicate with a higher power and find peace with his horrible disfigurement. While Custer can kick a whole lot of ass to deal with sinners, his approach to Eugene is a much better indicator of the preacher’s humanity.

The character in the show is far more human than in the comics, though there’s every chance that the TV version will also take some of the insane adventures that mark Eugene’s ride on paper. Ennis’s batshit vision included Arseface becoming a world famous pop star, and it just so happens that Colletti has been playing guitar and writing songs for over a decade.

“The guys didn’t really know that until after I got the job,” he says. “We were shooting the pilot and one day there was a prop guitar in the set of my room. I picked it up and tuned it up and started playing. They were excited. So I think, as an actor and fan of the comic, I’m hoping we get there. The storylines in the source material are just asinine, so it’ll be exciting to be able to explore that kind of stuff.”