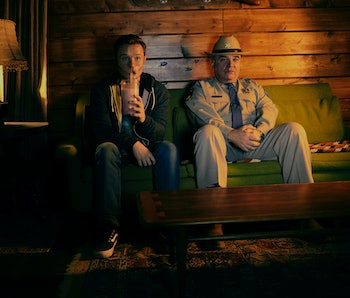 In the graphic novel series Precher from Hellblazer writer Garth Ennis and illustrator Steve Dillon, “Arseface” is a teenager with a souvenir mug from a harrowing act of self-mutilation. A staple throughout the comics’ five-year run, Arseface made his entry in the AMC series pilot played by Ian Colletti behind a muffling prosthetic that’s a real pain in the ass.

“The hardest part is not being able to eat in it,” Colletti told Inverse. “So, if you’re really pulling a long day thats 20 hours, I literally am drinking shakes all day because I can’t eat. It’s the saddest example of forced-method acting that I can come up with.”

But who is Arseface in Ennis’s comics, and how is he different in Seth Rogen and Evan Goldberg’s TV series?

Introduced in Preacher #22 in 1995, Arseface was the rebellious, shit-headed son of Sheriff Hugo Root, a ruthless, racist cop (one of many) in Annville, Texas. Root was abusive and hard-nosed, but his son was equally stubborn. Arseface was also a diehard Kurt Cobain fan, and he was continuously bullied by peers, because who liked grunge rock in 1995? He was so diehard, he almost actually died: Cobain was the only hero he had in his broken household, so when the Nirvana frontman put a bullet to his head, he did the same. But unlike Cobain, he survived.

The act changed the family, mostly for the worse. Arseface took on a more positive demeanor, doing his best to act like nothing was wrong, even though his life was bung-holed with a bang. His mother left and his father became aloof, ignoring his son. Without a mouth, the poor kid was barely understandable, and blood and saliva seeped from the hole that was once his mouth.

The comics offer a pitying translation whenever he speaks. A heartbreaking plea of “Don’t kill my dad!” (abusive as he is, Sheriff Root’s the only thing the kid’s got) becomes “DUHH KUH MUH DUHH!”

Without spoiling too much, Arseface embarks on a journey to seek revenge against Jesse Custer, the cursed reverend harboring Genesis. Arseface becomes full of hate, until he pushes deep into good fortune and national fame, albeit briefly.

But who is Arseface in the TV series? Very similar, while also significantly different. Arseface (given a real name, Eugene) isn’t seeking revenge against Jesse. In fact, he looks up to Reverend Custer, and eagerly attends his sermon for the first time since his incident.

The pilot doesn’t reveal much about Arseface’s isolation, only his wish to be accepted. His (still racist and mean) sheriff daddy at least acknowledges him, more than his comics version did; in the pilot, Sheriff Root resentfully makes him a meat smoothie when Jesse visits. His mother also didn’t leave, but she’s not all quite there either.

Also, since it’s 2016, Eugene isn’t into Nirvana, but does have an affection for ‘90s hip-hop and making Custer his bro. Also, since it’s television, Arseface has subtitles. While it’s satisfying to see the character adapted onscreen, it’s also enthralling that AMC has opted to make Arseface its own.